Every day, the lying mainstream media finds something else to be surprised over. Whether it’s the shocking results of an upset election or the continuous rise in President Trump’s approval ratings, these discoveries should come as no surprise to regular Americans. President Trump again and again demonstrates just how consistently he has his finger on the pulse of the American public, and the results prove that America is truly becoming a better place.

As a study from two professors at the University of Pennsylvania recently confirmed, racism has actually been on the decline in the United States since President Trump took the Oath of Office. Across the political spectrum, discriminatory views towards Hispanic-Americans and African-Americans have declined with both Democratic and Republican voters. This runs directly against the mainstream media narrative that President Trump has somehow sparked a surge in white nationalism in America, a smear that has been slung at other nationalist and populist movements around the world, such as Brexit.

This reality of a more racially peaceful nation can be attributed to several actions and policies under the Trump Administration. As the President frequently notes on campaign stops and in speeches, unemployment rates for Hispanic-Americans, African-Americans, and Asian-Americans have all already hit record lows during his tenure.

But perhaps it also runs much deeper than just the economic numbers, and is a direct result of the President’s shifting of our cultural views. Unlike Barack Obama, who sought to highlight, exploit, and worsen race relations through his implicit support for such movements as Black Lives Matter, and peddling such identity politics tropes as “white privilege” and “institutionalized racism,” President Trump has refused to divide us for political gain. Unlike Obama, who only cared to promote his identity as the first African-American President, President Trump has shifted away from the concept of “hyphenated-Americans” and back to the notion that we are all just Americans together.

As the President famously declared in his inaugural address, regardless of whether you are “black, or brown, or white, we all bleed the same red blood of patriots.” Donald Trump understands that there is truly no greater unifying force than our collective national identity, which focuses not on individual skin color, but instead on the three colors that we all fly under: Red, white, and blue. No statement from that address does a better job of summarizing this idea than that iconic line: “When you open your heart to patriotism, there is no room for prejudice.”

This is a President that Martin Luther King, Jr. would have been proud of, the man who taught us that people should be “judged not by the color of their skin, but by the content of their character.”

The Spectator: Trump has made America less racist

The election of Donald Trump has, of course, unleashed the latent racist which lurks within millions of Americans. We know this because enlightened opinion keeps telling us so. The New Yorker, for example, ran a piece in November 2016 declaring ‘Hate on rise since Trump’s election’, and quoting a list of incidents collected by the Southern Poverty Law Center – including the experience of a girl in Colorado who was allegedly told by a white man: ‘Now that Trump is president I am going to shoot you and all the blacks I can find’. TIME magazine, too, ran a story in the same month announcing ‘Racist incidents are up since Donald Trump’s election’. In March 2017 the Nation asserted ‘Donald Trump’s rise has coincided with an explosion in hate groups’, claiming that 100 racist organizations had been founded since Trump began his presidential campaign.

And so it goes on. Just as with Britain’s vote for Brexit, Trump’s strident language and his concentration on issues such as migration is supposed to have coarsened political discourse – legitimizing racist and xenophobic opinions in people who might otherwise have been shamed into silence. By this narrative, even slightly immoderate speeches, posters and campaigns by politicians become magnified through the lens of public opinion into something much more sinister. A speech on migration, goes the theory, can all too easily erupt into bar room arguments and end with a Muslim or a black man having his head kicked in.

It sounds vaguely plausible, but is it true? Not if a new paper by a pair of sociologists at the University of Pennsylvania is anything to go by. Daniel J. Hopkins and Samantha Washington set out to measure the effect of Trump’s election on anti-black and anti-Hispanic prejudice, using a randomly-selected panel of 2,500 Americans whose changing opinions have been under study since 2008. The academics report that they had been expecting to measure a rise in racist opinions, writing: ‘The normalization of prejudice or opinion leadership both lead us to expect that expressed prejudice may have increased in this period, especially among Republicans or Trump supporters’. They had been led to expect this, they say, through an extensive reading of recent literature in social sciences which, they say, supports the notion that racist attitudes lie dormant inside many people, waiting to be triggered by certain events – of which the election of Donald Trump might be one. There could, after all, hardly be anything more calculated to awaken an incipient racist than the president calling Mexicans a bunch of rapists.

Yet the study found exactly the opposite. Americans, claim Hopkins and Washington, have actually become less inclined to express racist opinions since Donald Trump was elected. Anti-black prejudice, they found, declined by a statistically-insignificant degree between 2012 and 2016, when Trump was elected. But then after 2016 it took a sharp dive that was statistically significant. Moreover, contrary to their expectations, the fall was as evident among Republican voters as it was among Democrats. There was also a general fall in anti-Hispanic prejudice, too, although this was more evident among Democrat voters.

It is a similar story to that in Britain, where the attempt to link Brexit with rising xenophobia has been somewhat debunked. A murder of a Polish man in the town of Harlow in August 2016 was widely attributed to Brexit – but eventually declared by police not to have been a hate crime at all. Similarly, a smashed window in a Spanish restaurant in South London on the night of the Brexit vote was initially widely reported to be an expression of euphoria on the part of xenophobes – but was later revealed to be an attempted burglary.

So has Trump actually been a good thing for race relations in the US, and if so, why? The University of Pennsylvania study is a little shy on this point, but raises the theory that people have found Trump’s pronouncements on migrants, Mexicans and so on to be so reprehensible that it has inspired them to think about their own attitudes. It is possible, they write ‘that Trump’s rhetoric clariﬁed anti-racist norms….given that the declines in prejudice appear concentrated in the period after Trump’s election, it seems quite plausible that it was not simply Trump’s rhetoric but also his accession to the presidency that pushed public opinion in the opposite direction’.

Well, maybe. It might be added that the election of Barack Obama also caught liberal opinion unawares. That event, it might be recalled, was supposed to be the breakthrough which led to a kinder, gentler America. Instead it seemed to be followed by a more fractious period in race relations, culminating in race riots in Ferguson, Mo., in 2014. Maybe social science has got it the wrong way round: it was the sight of a mixed race man in the White House who brought out in the inner racist in Americans who are inclined towards those feelings, while the reassuring sight of white man back in the Oval Office has calmed them down. 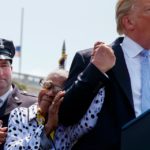