President Trump has always made it his goal to serve America’s best interests, and he has been unafraid – and perhaps even more motivated – to do so when such actions run afoul of the political elite and enrage the entrenched corrupt Swamp.

It goes without saying that American intervention in the South Asia and the Middle East has dragged on for far too long, from Afghanistan to Iraq to Syria. While some of these wars may have been started with the best of intentions, whether to protect America or to ensure stability abroad, others have been less than successful and have yielded more harm than good.

Syria is one such example. Although we have successfully eliminated the physical caliphate of ISIS, there are far too many other problems in that particular region that we simply cannot take on due to their inherent complexity and lack of immediate relevance to vital US interests. Syria is a clear case where it is beyond time to bring our troops back home.

When President Trump says America First, he means America FIRST, unlike the “elite” of both parties who act for their interests first. Always. The fact that both parties are criticizing him is only further proof that he is right.

The White House revealed Trump’s decision Sunday night and the president also shared his thoughts on the issue on Twitter on Monday.

“I held off this fight for almost 3 years, but it is time for us to get out of these ridiculous Endless Wars, many of them tribal, and bring our soldiers home,” Trump wrote on Twitter.

Trump said he would allow Turkey to engage in Syria, despite the American alliance with the Kurds in the region. In return, he said, Turkey would take all of the captured Islamic State terrorists.

The White House announced the deal after Trump spoke with President Recep Tayyip Erdogan of Turkey.

“Turkey will now be responsible for all ISIS fighters in the area captured over the past two years in the wake of the defeat of the territorial “Caliphate” by the United States,” the White House said in a statement.

Trump has tried to withdraw troops from Syria since destroying the Islamic State but has faced stiff resistance.

Jim Mattis, Trump’s first Defense Secretary, resigned in December in protest of the president’s decision to withdraw troops from Syria.

Trump’s decision earned criticism from some members in the foreign policy establishment, as they believe the Kurds deserve protection from Turkey, as a result of their efforts to fight the Islamic State.

Former Ambassador to the United Nations Nikki Haley criticized Trump on Twitter on Monday after his announcement.

Sen. Lindsey Graham called Trump’s decision a “disaster” and appeared on Fox News this morning to criticize the president’s move.

“WE WILL FIGHT WHERE IT IS TO OUR BENEFIT, AND ONLY FIGHT TO WIN,” he wrote. 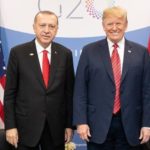 Our Take: Trump is Right on Syria