While the Democrats have spent months struggling to string together a coherent case against President Trump, the President’s legal team has summarized his entire defense with one very simple and accurate statement: There was no impeachable offense.

Put simply, even after the endless hearings, empty reports, and meaningless testimony, the Democrats have not been able to prove that President Trump committed any “high crimes or misdemeanors.”

Just as the Russia hoax collapsed because there is no legal definition of “collusion,” and the Trump campaign did nothing illegal, so too is impeachment collapsing because “quid pro quo” is not a crime, and President Trump did nothing wrong. Alan Dershowitz summarized it perfectly when he said that “quid pro quo is not a basis for an abuse of power,” and is, in fact, “part of the way foreign policy has been operated by presidents since the beginning of time.”

Only the modern Democratic party could be so lazy and incompetent that they would not only try to impeach a President who has done nothing wrong, but also try to impeach him for something that is not even a crime in and of itself. As Pam Bondi said on the floor of the Senate, this impeachment fiasco truly is a “sham” and based on “fiction.” 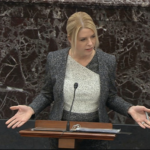 Our Take: There was No Impeachable Offense