After three years of disastrous feet-dragging and terrible pseudo-negotiations over Brexit, the United Kingdom finally has new leadership. And with it comes a renewed hope that the will of the people will be implemented.

Boris Johnson, MP and former Mayor of London, has been elected to be the next Leader of the Conservative Party, and subsequently the next Prime Minister of the U.K. Johnson, unlike his predecessor Theresa May, is in favor of withdrawing from the European Union without a deal if necessary, a move that rightfully terrifies the globalist leaders and bureaucrats of the E.U. because it would be highly beneficial to the British people, and a reassertion of the U.K.’s sovereignty.

Prime Minister-Designate Johnson has drawn numerous comparisons to President Trump, including through countless baseless accusations of being a racist and a sexist. But Johnson, like Trump, is only guilty of loving his country and wanting what is best for his constituents, regardless of how the mainstream media portrays him.

In his victory speech, Johnson laid out a clear vision for the United Kingdom under his leadership: Deliver Brexit, unite the country, defeat the Socialist Jeremy Corbyn, and energize the British people. He is every bit as committed to freedom and prosperity as President Trump, and the two will make for natural allies.

If Johnson can finally succeed where May failed, and honor the will of the British people as expressed in the original referendum in 2016, he will be on-track to Make the United Kingdom Great Again, which will also be good for America and the rest of the world.

The Blaze: Boris Johnson wins election, will be next Prime Minister of the United Kingdom

Former mayor of London and foreign secretary Boris Johnson has secured his party’s nomination to be the next prime minister of the United Kingdom. He is expected to take office on Wednesday.

Johnson promised to get right to work

“I say to all the doubters — ‘Dude, we’re going to energize the country,” Johnson said in his acceptance speech on Tuesday morning.

He promised to “work flat-out from now on with my team that I will build,” adding “[t]he campaign is over and the work begins.”

Only registered conservatives got to vote in this election

Since the conservatives currently control parliament, they were given the task of replacing current-Prime Minister Theresa May, who resigned in May over the outcome of her attempts to pass a Brexit plan. May was also a member of the conservative party.

Unlike May, who had opposed Brexit before she was elected but promised to see it through, Johnson was a proponent of leaving the European Union from the beginning.

May congratulated her replacement on Twitter on Tuesday, saying that he has her “full support from the back benches.”

Johnson was born in the US, but renounced his citizenship because of the IRS

If not for the U.S. tax code, Johnson could have been the first American citizen to become prime minister of the United Kingdom. Johnson was born in New York City (his father was a student at Columbia University at the time), although his parents left the U.S. and returned to England when he was only five-years-old. He was still an American citizen in 2015 when he sold a home in London and the IRS demanded he pay tax on it to the American government. Johnson, who was then mayor of London, paid the tax and then renounced his citizenship the following year to prevent the same thing from happening in the future.

In a tweet on Tuesday morning, President Donald Trump congratulated Johnson adding “[h]e will be great!”

Although he’s a career politician, Johnson has often been compared to Trump because of his tendency to ignore decorum in favor of speaking his mind, his populist leanings, and his unruly blonde hair. 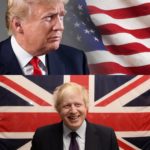 Our Take: The U.K. Finally Has a Chance to Deliver Brexit