As we have previously discussed on the show, President Trump and Attorney General Barr are fully prepared to go to war against the Deep State and seditious Democrat actors who tried to sabotage the 2016 election, and then the Trump Presidency.

First, it was Attorney General Barr’s appointment of U.S. Attorney for Connecticut John Durham to investigate the origins of the phony Russia probe. Now, as of last night, President Trump has taken an even bigger step forward: He has officially given Attorney General Barr full authority and discretion to declassify any and all documents that he feels are relevant to the Russia hoax conspiracy.

It should come as no surprise that Democrats are already running scared. The ever wild-eyed Adam Schiff has not only accused President Trump and AG Barr of “weaponizing law enforcement and classified information,” but has gone so far as to call these counter-investigations “un-American.” What a sudden change of tone from the same Democrats who have been calling for a release of the full, unredacted Mueller report. This is on top of the undignified display of Obama’s top intelligence officials, including John Brennan, James Clapper, and James Comey, all turning on each other and trying to throw each other under the bus first.

President Trump, AG Barr, and Durham are beating the drums of justice and the rule of law as they continue their march towards the Truth. Sooner or later, the real culprits will have nowhere left to hide.

By Talia Kaplan and Mike Arroyo

President Trump on Thursday night issued a memo giving Attorney General William Barr the authority to declassify any documents related to surveillance of the Trump campaign in 2016.

“Today, at the request and recommendation of the Attorney General of the United States, President Donald J. Trump directed the intelligence community to quickly and fully cooperate with the Attorney General’s investigation into surveillance activities during the 2016 Presidential election,” White House press secretary Sarah Sanders said in a statement.

“The Attorney General has also been delegated full and complete authority to declassify information pertaining to this investigation, in accordance with the long-established standards for handling classified information. Today’s action will help ensure that all Americans learn the truth about the events that occurred, and the actions that were taken, during the last Presidential election and will restore confidence in our public institutions.”

“The President @realDonaldTrump made a wise decision to let AG Barr on the documents,” Giuliani wrote. “I don’t know for sure but I seriously doubt there’s any national security concern but some of it could affect pending investigations. I’m sure AG and DOJ will make a very appropriate decision.”

Trump claims his campaign was the victim of “spying,” though the intelligence community has insisted it acted lawfully in following leads in the Russia investigation.

The president had told Fox News earlier in May that he would allow declassification “soon.” He elaborated, “I didn’t want to do it originally because I wanted to wait, because I know what they — you know I’ve seen the way they play. They play very dirty.”

Last month, Barr ran into a buzz saw of criticism from Democratic lawmakers and media figures for testifying that “spying did occur” against the Trump campaign in 2016. But despite the backlash, Barr appeared to be referring to intelligence collection that already has been widely reported and confirmed.

Foreign Intelligence Surveillance Act (FISA) warrants against former Trump campaign aide Carter Page are currently the subject of a Justice Department inspector general investigation looking at potential misconduct in the issuance of those warrants. That review also reportedly is scrutinizing the role of an FBI informant who had contacts with Trump advisers in the early stages of the Russia investigation.

The use of the term “spying” as it applies to the FBI’s surveillance in 2016 has been fiercely disputed. The New York Times, even as it reported last year on how the FBI sent an informant to speak to campaign advisers amid concerns about suspicious Russia contacts, stated that this was to “investigate” Russia ties and “not to spy.”

“I think spying did occur. The question is whether it was adequately predicated,” Barr testified last month, adding that he believed it is his “obligation” to review whether there was misconduct in the original investigation. “Congress is usually very concerned with intelligence agencies and law enforcement agencies staying in their proper lane.”

He added that “spying on a political campaign is a big deal.”

President Trump backed the attorney general’s testimony, saying the same day Barr testified last month that he thinks what Barr said “was absolutely true,” adding, “There was absolutely spying into my campaign.”

Democrats, though, charged that the testimony indicated Barr was a compromised witness. 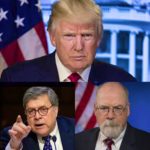 Our Take: The Truth is Coming for the Russia Hoaxers