As the Democrats continue bickering amongst themselves over who can be the most extreme, President Trump is quietly and cheerfully building his 2020 machine.

The Trump campaign recently announced that the campaign, together with the Republican National Committee, has raised over $105 million in the second quarter of 2019 alone, with much of that amount coming from small-dollar donations. The campaign raked in $54 million, while the RNC raised another $51 million.

For context, the RNC raised more in this second quarter than in the entire first half of 2018, and the combined total vastly surpasses where President Obama was at this same point in his presidency; in the second quarter of 2011, Obama’s campaign had raised just $46.3 million while the DNC pulled in $30 million.

And that’s not the only way that grassroots support for President Trump’s re-election is growing. Charlie Kirk, the founder and leader of the massive conservative student group Turning Point USA, has just announced that TPUSA has successfully acquired another one of the largest conservative student groups in the country: Students for Trump. With the two groups merging together and combining their resources and infrastructure, Kirk announced the “Turning Point Action” initiative to mobilize 1 million pro-Trump students on college campuses before the 2020 election.

From the historic fundraising numbers, to an expanded on-the-ground student movement, to the massive rally sizes still to this day, it is clear where all of the energy, growth, and momentum truly lies in American politics: The American people are ready to give President Trump four more years.

Turning Point USA founder and executive director Charlie Kirk, who has launched Turning Point Action, a national get out the vote initiative for President Donald Trump’s 2020 reelection campaign, announced the acquisition of Students for Trump on Tuesday.

TPUSA’s sister 501(c)(4) organization, Turning Point Action (TPA), announced on Tuesday its expansion with the acquisition of Students for Trump, and “all associated media assets.” The new initiative is seeking to organize one million student Trump-supporters in an effort to get out the vote in 2020.
“It’s no question that freedom is on the ballot in 2020,” said Kirk, “I’ve spent the last six years traveling the country and speaking to young voters. Millennials and Generation Z want to run their own lives and make their own money.”

“What we don’t want is insane, socialist and Marxist policies that our parents and grandparents risked, and many cases, lost their lives to defeat in their own generation,” added Kirk. He continued, “We’re proud to be at the forefront of the youth movement to re-elect freedom in 2020 by adding one million new voters to support four more years of President Trump.”

With this acquisition, Students for Trump, a project of TPA, will be the official pro-Trump student group on campuses across the country beginning in the fall 2019 semester. Kirk will take on the role of chairman, while Students for Trump co-founder Ryan Fournier will remain with the organization as co-chairman.

“Students for Trump sets out to build the largest candidate-focused chapter program in the nation with a primary goal of reaching Division I universities,” announced TPA in a statement, adding that the organization will be hosting “large-scale rallies and events” across the nation.

The first event, which will be the official “Launch Party,” is scheduled for August 23, 2019 at the Palms Casino and Resort in Las Vegas, Nevada. 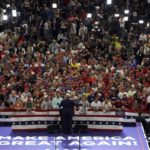 Our Take: The Trump 2020 Movement is Real and Organic