In the span of just a few days, there have been major developments in two of the biggest legal battles stemming from the 2016 election, involving two of the Deep State’s favorite targets from Team MAGA: General Mike Flynn and Roger Stone.

As we reported yesterday, General Flynn’s sentencing has been indefinitely postponed yet again as his defense team demands a retraction of his original (and fatally flawed) guilty plea. Although this does constitute another prolonging of the case, it gives the General and his team more time to fortify their case for dismissal and prepare to take the fight back to the Deep State prosecutors who are out to frame the Army legend.

Then, just yesterday afternoon, the Department of Justice announced that it would be revoking its original recommendation of a 7-9 year prison sentence for Roger Stone, who was convicted by a D.C. jury of the procedural crime of “making false statements.” Following the announcement, four of the prosecutors in Stone’s case all resigned simultaneously, in a near-total collapse of the government’s already-flawed case against the longtime political operative and ally of President Donald Trump.

At this rate, these two miscarriages of justice will soon collapse on themselves, as all witch-hunts should. And when they do, these two innocent men will finally win the vindication they so righteously deserve, and their freedom. 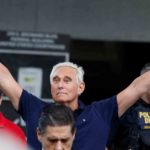 Our Take: The Tide is Finally turning for Gen. Mike Flynn and Roger Stone