With the official announcement over the weekend, “The Three Stooges” are going all-out. Unfortunately, we are not referring to the legendary comedy troupe of the 1930s, but instead to a trio that is significantly less entertaining, yet even more embarrassing than Moe, Larry, and Curly could ever hope to be.

First, it was the washed-up former governor of Massachusetts, and Republican-turned-Libertarian-turned-back-to-Republican Bill Weld. Then it was the one-term former congressman and recently-unemployed radio host and racist Joe Walsh. Now the unholy trinity is complete with the entrance of former governor Mark Sanford of South Carolina, who was at the center of one of the most infamously mismanaged extramarital affairs in modern American politics.

For a (very small) portion of the Republican base that preaches endlessly about morality, virtues, and dignity, this is a rather questionable crop of candidates who have decided to run against the incumbent president.

But, in the end, nothing will come of their uber-Quixotic bid to unseat President Trump. Donald Trump remains at historically high levels of popularity among Republican voters as he continues to deliver on his MAGA agenda. The stooges running against him have nothing to offer, are laughable individuals, and will soon be forgotten.

Sanford declared his candidacy in a lengthy thread on Twitter, where he stated that he considers “our nation’s debt, deficits, and spending” to be a major issue, and also accused the president having “ruled out action on the very things that drive spending and accumulated debt.”

The former governor, who also served as a congressman, is the third major candidate to challenge President Trump from within his own party, after former Governor Bill Weld (R-Mass.) and former Congressman Joe Walsh (R-Ill.).

Sanford first served as a congressman from South Carolina’s 1st congressional after being elected in 1994, going on to be re-elected three more times before deciding to run for governor in 2002. He unseated incumbent Democrat Jim Hodges and was re-elected in 2006.

In 2009, Sanford had an extramarital affair with an Argentinian woman, which resulted in then-Governor Sanford being censured by the South Carolina legislature, and resigning as chairman of the Republican Governors Association.

After completing his second term in 2011, Sanford ran for his old seat in Congress once again and won in a special election in 2013. But Sanford became an outspoken critic of President Trump in recent years, which led to the president endorsing Sanford’s primary challenger for his congressional seat in last year’s midterm cycle, Katie Arrington. Arrington managed to unseat Sanford, before ultimately losing the general election by a narrow margin.

In the weeks leading up to Sanford making his decision to run against President Trump, the president mocked the former governor and the other two challengers by calling them the “Three Stooges,” while also referring to Sanford as “Mr. Appalachian Trail.” This was in reference to Sanford’s affair, where he disappeared for a week in June of 2009 as he traveled to Argentina; while he was missing, one of his spokesmen claimed that the reason for his disappearance was that he was “hiking the Appalachian Trail.” 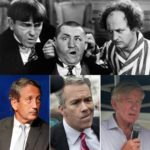 Our Take: The Three Stooges Have No Chance