On this Martin Luther King Jr. Day, we are reminded of the biggest fights for civil rights that have taken place in our nation’s history. It is fitting, then, that today was also the date of choice for a massive pro-Second Amendment rally in Richmond, Virginia.

The commonwealth of Virginia has become ground zero for the latest fight in the ongoing war against our Second Amendment right to bear arms. The blackface-wearing Butcher of Richmond, Ralph Northam, has entertained an obscene number of anti-gun bills in the Virginia state legislature ever since the Democrats took control of both houses last year, some of which even seek outright gun confiscation.

In response, already 91 out of Virginia’s 95 counties have declared themselves to be “Second Amendment sanctuaries” that are determined to protect the right to bear arms against any and all unconstitutional laws passed at the state level. And today, tens of thousands of patriots are descending upon the capital city of Richmond to protest and voice their support for the second most important right in our Constitution. The Left, unsurprisingly, is responding by blanket-labeling these Americans as “white nationalists” and “neo-Nazis.”

It should be no surprise that after years of a persistent assault on our First Amendment right to freedom of expression, the Left is eventually going all-in on a similar effort to eliminate our Second Amendment rights as well, as one cannot exist without the other. This is why we must fight for all of our rights with equal passion, as Reverend Martin Luther King, Jr. understood. 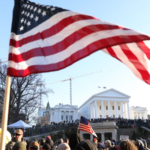 Our Take: The Second Amendment Must be Defended