Although the Democrats have moved from one excuse to another when it comes to attacking President Trump, some have remained stuck on one excuse and one excuse alone for their political misfortunes, no matter how outdated said excuse has become.

Even after the entirety of the “Russian collusion” conspiracy theory was completely debunked, one of the most prominent Democrats in the nation remains firmly in support of this absurd fantasy: Hillary Clinton. But now with a new twist.

Still more than willing to blame her entire election loss on mysterious Russians, Clinton has now taken to attacking a fellow Democrat and a left-wing third-party candidate in order to reinforce her own hallucinations. You may not like Congresswoman Tulsi Gabbard or Jill Stein of the Green Party, but they are not Russian assets. Unless you’re insane.

To believe otherwise is a whole new level of Trump Derangement Syndrome, taking on the appearance and tactics of a modern-day McCarthyism. The only difference is that in this case, the entirety of the mainstream media and endless hordes of bots on Twitter are ready to blindly support the accusations, further proving how widespread the delusion truly is.

Who will Hillary Clinton accuse of being a Russian spy next? Call in to AMERICA First and let us know your thoughts, at 833-334-6752.

Rep. Tulsi Gabbard (D-HI) is taking the fight to Hillary Clinton and the Democratic Party establishment after a spat Friday in which the party’s 2016 presidential nominee claimed Gabbard was a Russian puppet.

In a video released Sunday on Twitter, Gabbard talks about the origins of her long-simmering feud with Democratic leaders, dating back to her support for the insurgent campaign of Sen. Bernie Sanders (I-VT) in 2016.

Gabbard resigned from her post within the Democratic National Committee (DNC) in protest at the way then-chair Rep. Debbie Wasserman Schultz (D-FL) was treating Sanders. Her concerns were later vindicated by Wikileaks, which released emails showing that party leaders had conspired to help Clinton secure the nomination, forcing Schultz to resign.

In Sunday’s video, Gabbard recalls: “People warned me in 2016 that my endorsement of Bernie Sanders would be the end of my ‘political career.’ They said, ‘Clinton will never forget,’ that ‘she and her rich and powerful friends, her allies in politics and the media, will make sure that you are destroyed.’”

Gibbered then refers to the “countless hit pieces” against her in the mainstream media, the most recent of which was an Oct. 11 article in the New York Times painting Gabbard as a right-wing extremist. (The Times hosted the fourth primary debate just three days later, and the article — which lacked any evidence — was seen by some as an effort to marginalize Gabbard after she had attacked Sen. Kamala Harris (D-CA) effectively in the second debate.)

Citing her 16 years of military service in the U.S. Army National Guard, and her congressional service on national security committees, Gabbard rebukes Clinton and others for “falsely portray[ing] me as a traitor.”

Clinton claimed in a podcast hosted by former Barack Obama 2008 campaign manager David Plouffe last week that Gabbard was a “Russian asset” likely to run as a third-party candidate. She cited no evidence to back up her claim — which Gabbard promptly rejected, calling Clinton the “queen of the warmongers” and blaming her for a string of media smears.

In her video, Gabbard goes on to say that the message of the party establishment is that “if you stand up against Hillary and the party power brokers, if you stand up to the rich and powerful elite and the war machine, they will destroy you and discredit your message.”

“They will not intimidate us,” she declares. “The will not silence us.”

Gabbard goes on to say that not only is she running against corruption, but against the Democratic Party elite.

“I’m running for president to bring about a New Democratic Party, a new leadership that will fight for peace, fight for the people, and protect our planet.”

Separately the Gabbard campaign sent fundraising emails over the weekend capitalizing on the confrontation with Hillary Clinton. The email from Gabbard read, in part (original emphasis):

“Hillary Clinton — the queen of warmongers, embodiment of corruption and personification of the rot that has sickened the Democratic Party for so long — finally came out from behind the curtain yesterday, accusing me of being a Russian asset, asserting I was being “groomed” by Russian interests.

If this a fight she wants to have, one that has implications for all of us and the future of our democracy, then I challenge her to come out from behind her proxies and powerful allies in the corporate media, and face me directly.”

Gabbard has struggled to escape the second tier of presidential candidates, and failed to qualify for the third debate in September. However, she has made an impact in each debate appearance, partly because of her strong anti-war stance, and partly because of her willingness to attack other candidates’ positions — something few others have been bold enough to do until recently.

Though she supported Sanders in 2016, Gabbard has more moderate positions on several issues. She does not believe in decriminalizing illegal border crossings, for example, and would restrict many abortions in the third trimester — a position widely shared by the American public but which few of her rivals would dare to take.

She has come under fire in recent years for her opposition to U.S. military involvement in Syria — a position she has pursued, in part, through a controversial visit to Syrian dictator Bashar Assad in 2017. Speaker of the House Nancy Pelosi made a similar visit in 2007. 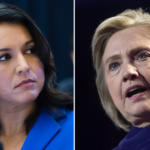 Our Take: The Russia Delusion Still Runs Deep with the Democrats