One of the surefire ways to be reminded that President Trump is Making America Great Again, is to witness his recent and repeated political and policy victories.

First, it was the significant victory in the special election for North Carolina’s 9th congressional district. Then, the very next day, it was an equally significant ruling from the Supreme Court that handed President Trump a much-needed win over one of the Left’s favorite weaponized tactics: activist judges.

After liberal “judges” in the out of control far-left 9th Circuit Court of Appeals had tried to block President Trump’s latest immigration policy – banning so-called “asylum seekers” who had already passed through another safe country on their way to the U.S. – the matter eventually went to the Supreme Court, which ruled yesterday that this policy can indeed go into effect.

The Supreme Court has ended the injunctions against President Trump’s new asylum policy after an injunction had been placed by the 9th Circuit Court of Appeals, as per Fox News.

President Trump had enacted a new policy earlier this year dictating that migrants who passed through another “safe” country on their way to America must first seek asylum in that country, rather than be allowed to continue to America. The Supreme Court overruled the injunction by a 7-2 vote, with only Justices Ginsburg and Sotomayor dissenting.

The injunction had first been ordered by San Francisco-based Judge Jon Tigar, an Obama appointee to the U.S. District Court. As of the Supreme Court’s ruling, the policy can now be implemented in all of the states that are outside the 9th Circuit, where the injunction is still in effect as the case is debated in the lower courts.

President Trump declared victory on Twitter, calling it a “BIG United States Supreme Court WIN for the Border on Asylum!” The Department of Justice said that the newly-enacted policy, and the ruling upholding it, would “bring order to the crisis at the southern border, close loopholes in our immigration system, and discourage frivolous claims.” 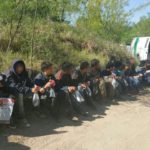 Our Take: The Rule of Law (and President Trump) Prevail Again