Conservative Americans have many reasons to celebrate the presidency of Donald Trump. On Wednesday, the President’s latest announcement only further confirmed that President Trump is the best ally of true conservatives in America today.

After previously taking numerous actions to safeguard the sanctity of life and protect religious freedom, President Trump is making yet another historic move unlike anything seen before: He will become the first sitting President to attend the March for Life in-person.

Since the disastrous Roe v. Wade Supreme Court decision of 1973, no President has never shown such dedication to the pro-life lobby and made such a bold move. Having already confirmed more than 150 of constitutionalist judges and further securing religious freedom, it should be no surprise that Donald Trump is the first President to finally break the trend and make the strongest possible statement yet proving that he stands completely behind America’s pro-life movement. We are winning. 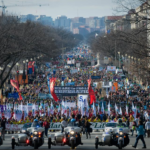 Our Take: The President Stands with the Pro-Life Movement