2020 is going to be an historic year for many reasons. For just one, look no further than the ongoing protests in Iran. Less than two weeks after the Left and Media lectured us that war was inevitable between the United States and Iran, the situation has now completely flipped: War is now all but averted, and it is regime–change from within may be right around the corner.

After the Iranian regime was finally forced to admit to the obvious, and confess that they were responsible for the downing of a passenger jet with 176 innocent people aboard, Iranians have begun making their voices heard, loud and clear. In the streets where chants of “Death to America” once filled the air, there are now chants of “Death to the dictator,” in reference not to our President, but to their Ayatollah. This is historic. After 40 years of oppression the Persians have had enough of the mullahs and their theocratic fundamentalism.

The people of Iran have been downtrodden for two generations, from a crippled economy to a total lack of civil rights, and a regime which exports its perverse ideology and violence around the world. This latest action by the government, and the subsequent attempt at a cover-up, may have been the final straw. Iranians are no longer afraid to make it clear that they want to be free and finally we have a president in the White House who is not their side and not the side of their oppressors. 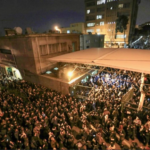 Our Take: The People of Iran are Rising Up