Only in this current era of FakeNews could the media be so blatantly dishonest that they try to turn a confirmed scandal of a former Vice President into a newfound fake scandal for the incumbent President instead.

In any other era, and in just about any other administration, the scandal of Joe Biden’s foreign entanglements and abuse of government power would be the focus of national and international news, and not to mention 24/7 scrutiny. But as long as Donald Trump is in the White House, the press will shamelessly cover for Joe Biden while trying to portray President Trump as the guilty one.

After all, Joe Biden is the one who has openly admitted to intimidating the Ukrainian government into firing a prosecutor who was investigating his own son, under threat of being deprived of American foreign aid. That President Trump simply wants this matter looked into more thoroughly is an effort to uphold justice, not subvert it.

But sooner or later, as long as President Trump does all that he can to keep the focus where it should be, then the media will be unable to protect Biden forever. Sooner or later, the questions will beg answers to the point that even the likes of CNN will not be able to ignore them forever. Maybe.

“I have never spoken to my son about his overseas business dealings,” Biden told Fox News reporter Peter Doocy on Saturday in Iowa before calling on President Donald Trump to be investigated over a phone call he made to Ukraine’s president.

The New Yorker article, titled “Will Hunter Biden Jeopardize His Father’s Campaign?” is an in depth look at Hunter Biden’s life and business dealings. It also contains a segment where Hunter apparently recalled discussing Ukrainian natural-gas producer Burisma “just once.”

“In December, 2015, as Joe Biden prepared to return to Ukraine, his aides braced for renewed scrutiny of Hunter’s relationship with Burisma. Amos Hochstein, the Obama Administration’s special envoy for energy policy, raised the matter with Biden, but did not go so far as to recommend that Hunter leave the board. As Hunter recalled, his father discussed Burisma with him just once: “Dad said, ‘I hope you know what you are doing,’ and I said, ‘I do.’ ””

The inconsistency was pointed out on Twitter by Daily Mail U.S. political editor David Martosko.

However, a senior administration official told Fox News’ Ed Henry that the call contained “no quid pro quo,” and that it would be “in the president’s interest” to release the call transcript.

Trump denies any wrongdoing and called the whistleblower “highly partisan.” 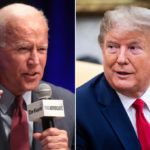 Our Take: The Media Tries to Turn Biden’s Scandal into Trump’s Scandal