If there was any doubt remaining as to whether or not the mainstream media is the enemy of the people, then the media’s reaction to the death of ISIS leader, Abu Bakr al-Baghdadi, should have eliminated any such doubt.

It was not enough that the Washington Post saw fit to issue a headline glowingly describing the murderous terrorist mastermind as an “austere religious scholar” who was “at the helm of” ISIS. Even beyond this egregious act of memorializing a terrorist, the criticism of President Trump’s handling of the ISIS threat was even more corrupt.

From Joe Scarborough comparing President Trump’s announcement to the mass torture carried out by the dictator Saddam Hussein, to Max Boot claiming that al-Baghdadi was somehow “heroic” because he chose to commit suicide, the absurd levels of cognitive dissonance and delusion that have been displayed in the last 48 hours are enough to make one completely reject any and all mainstream media coverage of anything.

Trump Derangement Syndrome is real, and it exists in all of the mainstream media who would rather insult the President of the United States or eulogize a dead mass-murdering terrorist leader simply because of their personal political agenda. They truly are the Enemy of the People. 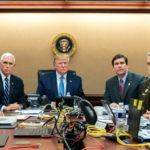 Our Take: The Media is Kinder to Terrorists than to President Trump