First it was the smear of the Covington Catholic boys. Then it was Jussie Smollett’s hoax. Now, halfway through 2019, the Left has their third major case of, seemingly, manufactured outrage over nothing, featuring yet another fake hate crime.

Erica Thomas, a Democratic member of the Georgia House of Representatives from the 39th District, accused a white man of telling her to “go back to where [she] came from.” Thomas wasted no time in directly connecting this to President Trump’s recent tweets about “the squad,” and claimed it was a “racist” attack. For several hours, the mainstream media ate this story up, and social media rushed to believe her account with the trending hashtag #IStandWithErica.

But, as with virtually all sensational stories pushed by the Left, it wasn’t long before an inconvenient little thing called the truth came along to blow the story apart.

The man whom she accused, Eric Sparkes, came forward while Thomas was giving an interview and admitted to being the man in question. He proceeded to clarify that, while he did use a vulgarity to insult her when she took too long in the express lane of a convenience store, he never told her to “go back.” Sparkes further demolished the narrative by revealing that he is a registered Democrat, and a Cuban-American. Thomas herself then backtracked her own words, admitting that he never actually said “go back.”

This is all the Left has left. Even as they triple down and continue to insist that America has a “race” problem, actual examples of racism against minorities are very rare in America today. Naturally, the Left has few other options than to simply manufacture instances of racism in order to boost their “narrative.” If they keep this up, then not only will they further embarrass themselves, but they could very well push more Democrats like Mr. Sparkes to eventually walk away from the Democratic Party.

The Daily Wire: Democrat Claims Man Told Her To ‘Go Back To Where’ She ‘Came From.’ Now She Appears To Be Changing Her Story.

Georgia Democratic State Rep. Erica Thomas claimed in a tweet on Friday that a white man told her to “go back to where” she “came from” at a grocery store, a claim that went viral but is now being disputed.

The incident reportedly happened on Friday at an Atlanta-area Publix store, when a man named Eric Sparkes allegedly confronted Thomas for having too many items while in the express checkout lane.

Thomas tweeted: “Today I was verbally assaulted in the grocery store by a white man who told me I was a lazy SOB and to go back to where I came from bc I had to many items in the express lane. My husband wasn’t there to defend me because he is on Active Duty serving the country I came from USA!”

Thomas’ claim trended at the top of Twitter for most of the day on Saturday and garnered extensive coverage across the media. Thomas also posted about the incident in an emotional video on her Facebook account.

“This white man comes up to me and says, ‘You lazy son of b**ch. You need to go back where you came from,'” Thomas alleged. “Sir, you don’t even know me. I’m not lazy. I’m nine months pregnant.”

WSB-TV went to the Publix store on Saturday to interview Thomas and Sparkes showed up, leading to another confrontation between Thomas and Sparkes.
Sparkes completely denied telling Thomas to “go back … where you came from.”

“I called you a lazy (expletive),” Sparkes told Thomas. “That’s the worst thing I said.”

Sparkes told the TV station that he is Cuban, a life-long Democrat, and that he believes Thomas is making her claims “for political purposes.”

“This woman is playing the victim for political purposes because she is a state legislator,” Sparkes said. “I’m a Democrat and will vote Democrat for the rest of my life, so call me whatever you want to believe. For her political purposes, make it black, white, brown, whatever. It is untrue.”

Thomas later slightly changed her statement, saying: “I don’t want to say he said ‘go back to your country’ or ‘go back to where you came from,’ but he was making those types of references is what I remember.”

In multiple Facebook posts in the days prior to the incident, Sparkes made it clear that he is not a fan of President Donald Trump and he came to the defense of far-left Reps. Alexandria Ocasio-Cortez (D-NY), Ilhan Omar (D-MN), Rashida Tlaib (D-MI), and Ayanna Pressley (D-MA) over Trump’s attacks on them last week. 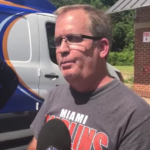