Even three years later, the Democrats are fuming over their loss in the 2016 election. That anger has manifested in their numerous attempts to subvert and remove President Donald Trump, no matter how many times they fail.

At the core of their desire to regain power is their vision of fundamentally transforming America by destroying all of the values upon which our nation was built. It stands to reason, then, that in their quest for power, they are unafraid to bulldoze right through institutions that represent that greatness, from the Constitution and the Bill of Rights to the courts and religious institutions.

The ongoing impeachment crusade represents the culmination of their insatiable appetite for power, as they bend the rules of this process as outlined in the Constitution to serve their political needs. They have already weaponized the intelligence community, the mainstream media, and other key outlets in their efforts to undermine the Trump Presidency; now they seek to remove him even in direct violation of the Constitution itself.

As we discussed yesterday with David Limbaugh, their end goal is clear: They want to destroy everything that America stands for and create their own leftist utopia in its place. That is the heart of the matter at the end of the day: It’s not even about President Trump in the long run; it’s about America as a whole. 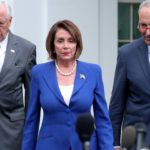 Our Take: The Left Wants Power, and Will Destroy America to Get it