There was once a time when such a terrible occurrence as a mass shooting would be the catalyst for national unity; unity in mourning for the victims, and unity with a resolve to stand strong and move forward as one country.

Not so today. Now, whenever a mass shooting takes place, one side can only look at it as a potential to score political points. They shamelessly stand on the graves of the victims even before their bodies have gone cold, and use their deaths to promote their political agenda. Whether that cause is to attack the President with false smears of supposedly supporting “white nationalism,” to renewed calls for the banning of firearms, there is no low to which the Democrats cannot and will not stoop.

Naturally, the media rushed to declare that this weekend’s shooters were somehow motivated by President Trump, and a number of Democratic presidential candidates – including Robert Francis O’Rourke and Pete Buttigieg – openly called the President himself a “white nationalist.” Never mind the facts of the cases, including how the El Paso shooter was a progressive socialist, and the Dayton shooter openly expressed support for Elizabeth Warren; to Democrats, reality is optional. And if reality stands in the way of their narrative, they won’t think twice about shunning the truth in favor of preaching to their ever-hysterical choir.

The Democrats’ behavior immediately following the weekend’s two mass shootings is an indication of how truly depraved and immoral the party has become. To them, senseless deaths are golden opportunities for promoting their message, where they can subsequently spew their own hateful rhetoric that could very well inspire further acts of violence. Such a mindset displays a level of insensitivity and recklessness that could potentially be just as dangerous as the actions of the shooters themselves.

Democrats are blaming President Donald Trump for the shootings in El Paso on Saturday and another in Dayton, Ohio overnight that killed 29 people.

“Ohio Sen. Sherrod Brown attacked his Republican colleagues for failing to defy the gun lobby and pass any kind of gun control legislation.

He also called for President Donald Trump to tone down his “divisive racist rhetoric” but stopped short of conceding that Trump’s language has encouraged white supremacist terrorism.”

Democrat and presidential candidate Julian Castro “pointed to a ‘toxic brew’ of white nationalism and says Trump needs to do more to “unite Americans instead of fanning the flames of bigotry.”

“We have a president of the United States who is particularly responsible,” Booker said in an interview with Meet the Press.

“In my faith, you have this idea that you reap what you sow, and he is sowing seeds of hatred in this country, this harvest of hate violence that we are seeing right now lies at his feet,” Booker said. “There is a complicity in the president’s hatred that undermines the goodness and decency of Americans.”
CNN reported:

“Yes. I do,” O’Rourke said on CNN’s State of the Union. The Democrat also referenced Trump’s record of insulting Mexicans as “rapists” and describing asylum-seeking migrants as an infestation. “The things that he has said both as a candidate and then as the President of the United States, this cannot be open for debate,” he said.”

The Los Angeles Times reported that Democrat candidate and the mayor of South Bend, Indiana, Pete Buttigieg, said the United States is “under attack from homegrown white nationalist terrorists.

“White nationalism is evil, and it is inspiring people to commit murder, and it is being condoned at the highest levels of the American government, and that has to end,” Buttigieg said at a candidate forum in Las Vegas.

“He later specified that he was referring to Trump,” the Times reported.

“The president of the United States is condoning white nationalism,” Buttigieg said.

Presidential hopeful and Sen. Kamala Harris (D-CA) posted an interview she gave on Twitter where she directed her remarks to the president.

“Too many families in too many communities have been forced to endure the daily horror of gun violence,” Pelosi said. “Enough is enough. The Republican Senate’s continued inaction dishonors our solemn duty to protect innocent men, women, and children and end this epidemic once and for all.” 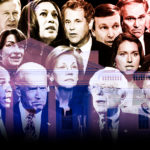 Our Take: The Left, Once Again, Exploits Tragedy for Their Own Political Gain