The Left’s entire worldview is dictated solely by being against everything that President Trump is for. Simply look no further than their complete 180-degree turn on foreign policy.

One of the major pillars of the post-9/11 Democratic Party was an opposition to war, most prominently seen during the George W. Bush administration in the aftermath of the Iraq War. Many Democrats, including Barack Hussein Obama, ran for office on anti-war messages during and after Bush’s tenure.

Yet now that we finally have a Republican president who is anti-war and has vowed to bring the troops back home, the Left has suddenly done a complete turnaround and now wants our troops to stay in the Middle East. Even the likes of the far-left socialist barista Alexandria Ocasio-Cortez has suddenly decided that she now loves war, just so long as President Trump does not.

There could not be a clearer contrast between our two political options today: A man who puts America First, or a party that is devoted solely to hating everything that this man does.

Ocasio-Cortez’s stance is a complete reversal of her earlier position on the war in Syria and other “endless wars” overseas.

She ran in 2018 on a pledge to end the war in Syria and elsewhere: “Alexandria believes that we must end the “forever war” by bringing our troops home, and ending the air strikes that perpetuate the cycle of terrorism throughout the world,” her 2018 campaign website said:

Since the invasion of Iraq in 2003, the United States has entangled itself in war and occupation throughout the Middle East and North Africa. As of 2018, we are currently involved in military action in Libya, Syria, Iraq, Afghanistan, Yemen, Pakistan, and Somalia. Hundreds of thousands of civilians in these countries have been killed either as collateral damage from American strikes or from the instability caused by U.S. interventions. Millions more have fled their broken countries, contributing to the global refugee crisis.
…

According to the Constitution, the right to declare war belongs to the legislative body, and yet many of these global acts of aggression have never once been voted on by Congress. In some cases, we’ve even acted unilaterally, without the backing of the United Nations.

America should not be in the business of destabilizing countries. While we may see ourselves as liberators, the world increasingly views us as occupiers and aggressors. Alexandria believes that we must end the “forever war” by bringing our troops home, and ending the air strikes that perpetuate the cycle of terrorism throughout the world.

By bringing our troops home, we can begin to heal the wounds we’re opening by continuing military engagement. We can begin to repair our image. We can reunite military families, separated by repeated deployments. We can become stronger by building stronger diplomatic and economic ties, and by saving our armed forces only for when they’re truly needed.

In addition, Ocasio-Cortez has repeatedly used her widely-followed Twitter account to attack U.S. wars in Syria and elsewhere.

Ocasio-Cortez did not provide an alternative solution for Syria, or for Kurdish security, or relations with Turkey. 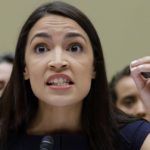 Our Take: The Left is Suddenly Pro-War just to be Anti-Trump