As the Democrats’ primaries draw closer, the candidate field is becoming more of a circular firing squad with each passing day.

With the withdrawal of Cory Booker, the field becomes even less diverse and more white, despite the party touting itself as the party of diversity and inclusion. At the same time, the socialists Bernie Sanders and Elizabeth Warren are trying to prove that each of them is further to the Left than the other.

Now additional reports claim that Bernie once privately told Warren that a woman is incapable of winning the presidential election, with Bernie denying this claim. It appears the Democrats’ objective of socialism has clashed with their equally-rabid demand for identity politics, as it becomes clear that the two just might actually be incompatible.

With no end to the infighting in sight, hopefully it will become even more obvious to the average American that the dysfunctional and ever radical Democrats are in no shape to lead America. 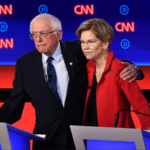 Our Take: The Left is Eating Itself