Few places better represent the sheer insanity of the Left than San Francisco. On Tuesday, the city proved just how far it is willing to go in its war on American values.

The San Francisco Board of Supervisors, consisting entirely of Democrats, voted unanimously to pass a resolution that officially labeled the National Rifle Association a “domestic terrorist organization.”

Even though this is a purely symbolic move with no actual enforcing power, it is still very disturbing for multiple reasons.

First, with as broad a stroke as possible, it paints all of the over 5 million innocent Americans who are members of the NRA as domestic terrorists. Second, it accuses them of being domestic terrorists solely because they support their Constitutional right to keep and bear arms.

Lastly, and most dangerous of all, this move provides more motivation to potential terrorists on the far-Left, who may subsequently be inspired to commit violence against NRA members and other law-abiding American citizens.

It is not a far-fetched possibility. From James Hodgkinson, the Bernie Sanders volunteer who attempted to assassinate Steve Scalise and other Republican members of Congress, to Willem van Spronsen, the Antifa terrorist who attempted to blow up an ICE facility in Tacoma, Washington, the rhetoric being spread by the Democrats only fuels the fires of hatred, and risks more attacks and politically-motivated bloodshed.

The Left knows this. The fact that they are still making such statements is a clear sign that they do not care who they harm, as long as they promote their agenda, think they can get away with it, and gain more power.

The San Francisco Board of Supervisors voted unanimously on Tuesday to declare the National Rifle Association (NRA) a “domestic terrorist organization.”

The resolution claims that the NRA incites and arms those who would use guns in acts of mass terrorism driven by hatred. It reads, in part:

“WHEREAS, Reported hate crimes have increased by double digits since 2015, and

WHEREAS, There are over 393,000,000 guns in the United States, which exceeds the country’s current total population, and

WHEREAS, Our elected representatives, including the President, have taken an oath swearing to “support and defend the Constitution of the United States against all enemies, foreign and domestic.”

WHEREAS, The United States Constitution specifically delineates that the country was founded to establish justice, insure domestic tranquility, and promote the general welfare …

WHEREAS, The National Rifle Association musters its considerable wealth and organizational strength to promote gun ownership and incite gun owners to acts of violence, and …

WHEREAS, The National Rifle Association through its advocacy has armed those individuals who would and have committed acts of terrorism; and

WHEREAS, All countries have violent and hateful people, but only in America do we give them ready access to assault weapons and large-capacity magazines thanks, in large part, to the National Rifle Association’s influence; now, therefore, be it

RESOLVED, That the City and County of San Francisco intends to declare the National Rifle Association a domestic terrorist organization; and, be it

FURTHER RESOLVED, That the City and County of San Francisco should take every reasonable step to assess the financial and contractual relationships our vendors and contractors have with this domestic terrorist organization; and, be it

FURTHER RESOLVED, That the City and County of San Francisco should encourage all other jurisdictions, including other cities, states, and the federal government, to adopt similar positions.”

Though the resolution mentions the U.S. Constitution, it fails to mention the Second Amendment.

Bay Area public radio station KQED points out that the resolution is toothless and has no practical effect.

Oakland-based Fox affiliate KTVU-2 quoted a statement by the NRA: “This ludicrous stunt by the Board of Supervisors is an effort to distract from the real problems facing San Francisco, such as rampant homelessness, drug abuse and skyrocketing petty crime, to name a few. The NRA will continue working to protect the constitutional rights of all freedom-loving Americans.”

Update: The NRA issued another statement: “This is a reckless assault on a law-abiding organization, its members, and the freedoms they all stand for. We remain undeterred – guided by our values and belief in those who want to find real solutions to violence.” 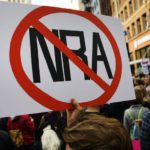 Our Take: The Left Dehumanizes its Opposition Again