Just when you thought “Russia” conspiracy delusions could not possibly get any crazier, the Democrats have outdone themselves yet again.

Only one week after the accusations of “collusion” between the Trump campaign and the Russian government finally died, courtesy of the dumpster fire that was Robert Mueller’s Congressional testimony, the Democrats are now actively promoting another absurd conspiracy theory of Russian involvement in U.S. politics. And strangely enough, the target this time is not a Republican, but one of their own fellow Democrats.

After Representative Tulsi Gabbard of Hawaii dared to attack establishment favorite Kamala Harris of California, Harris’s first response after the debate was to blame her humiliation by Gabbard on…the Russians.

The only thing more ridiculous than this excuse is the fact that the media rushed to agree with Senator Harris, instantly publishing puff pieces supporting the outrageous claim in some of the largest mainstream media outlets. The media blindly followed the orders of one of their Democratic overlords like a trained dog, almost immediately and without question.

All this accomplishes, beyond further division of the party and more promulgating of one of the wackiest conspiracy theories of all time, is the railroading of one of the few Democratic candidates who doesn’t completely tow the party line on identity politics of rabid interventionism overseas. While Gabbard is still mostly a socialist with some distinctly peculiar theories herself, she dares to hold a select few opinions that the Democratic Party of 2019 is not OK with, and for that, she is just as problematic to them as any Republican. That is how deranged they truly are.

Sen. Kamala Harris (D-CA)’s campaign press secretary suggested Russia was behind Rep. Tulsi Gabbard (D-HI) after she landed an effective blow on Harris’ record as a prosecutor during the Democrat debates on Wednesday night.

“Reporters writing their stories with eyes on the modern-day assignment desk of Twitter, read this: ‘The Russian propaganda machine that tried to influence the 2016 election is now promoting the presidential aspirations of a controversial Hawaii Democrat,’” he tweeted. He later retweeted his tweet.

The NBC News article from February 2019 cites, “several experts who track websites and social media linked to the Kremlin” who have seen “what they believe may be the first stirrings of an upcoming Russian campaign of support for Gabbard.” Among the experts are analysts from New Knowledge, which ran a Russian-like disinformation campaign against Republican Alabama Senate candidate Roy Moore.

Sams’ attacks came after Gabbard pointed out Harris prosecuted more than 1,500 people for marijuana violations after she became California attorney general in 2010, but earlier this year laughed about smoking it during an interview with the Breakfast Club radio show.

“Senator Harris says she’s proud of her record as a prosecutor, and that she’ll be a prosecutor president, but I’m deeply concerned about this record. There are too many examples to cite, but she put over 1,500 people in jail for marijuana violations and laughed about it when she was asked if she ever smoked marijuana,” Gabbard said, to loud applause.

“She blocked evidence that would have freed an innocent man from death row until the courts forced her to do so,” Gabbard continued. “She kept people in prison beyond their sentences to use them as cheap labor for the state of California and she fought to keep the cash-bail system in place. That impacts people in the worst kind of way.”

Instead of addressing those attacks, Sams blasted Gabbard on her meeting with Syrian dictator Bashar al-Assad in 2017 to discuss an end to the civil war in Syria, where U.S. troops were deployed.

“Yo, you love Assad,” he tweeted first.

He continued attacking Gabbard, calling her a “friend” of Assad, and then an “apologist” for Assad.

Harris, in the spin room afterwards, took up the line Gabbard was an Assad “apologist” — also not addressing the substance of Gabbard’s criticism.

“This is going to sound immodest but I’m obviously a top-tier candidate. And so I did expect that I would be on the stage and take hits tonight,” Harris said.

“I think that this coming from someone who has been an apologist for an individual, Assad, who has murdered the people of his country like cockroaches, she who has embraced and been an apologist for him in a way that she refuses to call him a war criminal, I can only take what she says and her opinion so seriously. And so, you know, I’m prepared to move on,” she said. 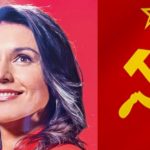