There are many significant takeaways from President Trump’s masterful speech on Iran yesterday. From his declaration of America’s newfound energy independence to his exhortation to increase NATO’s involvement in the Middle East, he promised significant changes to our approach in the region.

But perhaps the most significant element was his direct appeal to the Iranian people. As the President said, Iran has the potential to be a great country; after all, it was once home to the Persian Empire, one of the oldest civilizations in history, one with a long and rich culture. Unfortunately, much of that heritage has been forgotten or subverted ever since the Islamic revolution in 1979 that turned Iran into a radical theocracy run by bloodthirsty Mullahs.

Indeed, much of what we see of Iranian protesters chanting “Death to America” can be blamed not on the average Iranian citizen, but the ayatollah and his cronies in government who have been steadily brainwashing the population for the last four decades.

As such, the only way that true and permanent change can take place in Iran is if the people themselves wake up to how much their so-called leadership has failed them and destroyed their country. This can be done through continued sanctions to cripple the regime’s leaders and through further appeals for the citizens to speak up for themselves and express their desire for peace and freedom and to take action where possible. Whatever develops, we must remember that when it comes to Iran, it is the leaders who are our enemies, not the people. 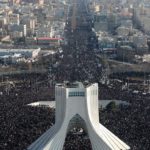 Our Take: The Iranian People Deserve Better than the Mullahs