In what was easily the biggest disaster for the anti-Trump movement since Robert Mueller’s abysmal testimony, Democrats have outdone their own failure.

Yesterday’s first public impeachment hearing was promoted by the FakeNews and social media as the beginning of the end for President Trump, which would supposedly reveal his impeachable offenses to the entire world.

But both of the Democrats’ supposed “star witnesses” produced pure snooze-fests of their “opinions” on the Trump Administration’s foreign policy. They were forced to admit that their knowledge of the alleged “quid pro quo” was based on chains of hearsay. And, most damning of all, neither of the Democrats’ supposed “star witnesses” could even name one impeachable offense the President has commuted when tasked with doing so by Congressman John Ratcliffe.

There is a reason the hearings surprisingly ended so early, and why Chairman Adam Schiff looked progressively more nervous as they dragged on: Because the Democrats are realizing that the latest thing they have pulled out of their bag of tricks is failing just as miserably as all of the others have. 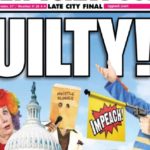 Our Take: The Impeachment Hearings: a Disaster for Democrats