As stated numerous times on this show, it was to be expected that Inspector General Michael Horowitz’s report turned out to be a 400-page deflection. Not only are IG reports largely symbolic and mere summaries, rather than actual criminal probes that could produce actual results, but the expectation that someone like IG Horowitz would actually pursue justice against his fellow swamp-dwellers is a delusion.

Ever since the “Russian collusion” conspiracy theory was first weaponized, its lead propagandists have been Deep State actors; from Obama’s top intelligence officials such as James Comey, John Brennan, and James Clapper, to former Special Counsel Robert Mueller. In the case of Horowitz’s report, a member of the Deep State was essentially tasked with investigating the Deep State.

So it should surprise no one that he found “no wrongdoing” in the blatant abuse of the FISA court process against then-candidate Trump’s presidential campaign. There is simply no way we can actually fight the system by relying on those within the system to suddenly be objective and not think about their own interests, or those of their comrades.

Only truly seasoned prosecutors and those with a history of actually taking on the Deep State can get the job done. That is exactly why U.S. Attorney John Durham and Attorney General Bill Barr are perfect for the counter-investigation, and why they are truly our last and only hope for justice to be done. At last. 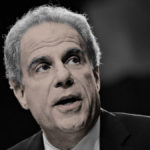