President Trump is rightfully refusing to back down in his criticisms of the Four Horsewomen of the Democrat Apocalypse, and especially the most anti-American Ilhan Omar.

Despite the endless moral preening and virtue-signaling from the FakeNews Industrial Complex, Trump is winning this battle. In a development that has left the legacy media utterly baffled, Republican support for the President has risen, not fallen, in the aftermath of his Twitter war with “the Squad.”

However, while the GOP in Congress has stood unanimously behind the President on such matters as impeachment, this latest cultural battle has drawn even clearer lines between who can and who cannot be trusted. In addition to the sheer cowardice of the four “Republicans” who voted with the Democrats to condemn the President’s tweets as “racist,” scores of others in Congress have similarly issued public statements in which they cave to the Left in an attempt to curry favor with the media.

From former Administration officials, to members of the party’s campaign wing, to media commentators, the battle lines are being drawn between those who are ready for the long-term fight, and those who would rather run from conflict. Even the House Democrats understand the importance of unity, and demonstrate this in their defense of Omar and the rest of her group of radical Socialists; they do so at their own peril, but they are united nonetheless. The same cannot be said for the Republican Party.

It is so important now, more than ever, to stand behind President Trump, no matter how rough the fight gets. Because that is how we will triumph over the radicalized Left that wishes to dismantle our Republic.

Forty of the 250 Republicans serving in the U.S. Congress as of Wednesday afternoon have criticized Republican President Donald Trump over his attacks, widely condemned as racist, on four Democratic lawmakers, all minority women.

Four Republicans voted on Tuesday in favor a Democratic-sponsored House of Representatives resolution condemning Trump’s tweets, despite being told by Republican leaders to oppose it.

Will Hurd, Susan Brooks, Brian Fitzpatrick and Fred Upton – along with independent Justin Amash, a former Republican – voted with Democrats to pass the resolution 240-187.

Defying Trump is a politically risky act for a Republican lawmaker. The president, who enjoys strong political support among a core group of conservative voters, frequently lashes out against almost anyone he perceives to be an opponent.

On Sunday, Trump tweeted that four Democratic congresswomen – Alexandria Ocasio-Cortez of New York, Ilhan Omar of Minnesota, Ayanna Pressley of Massachusetts and Rashida Tlaib of Michigan – should “go back” where they came from, even though all of them are U.S. citizens and three were born in the United States.

Here is a list of Republicans in Congress who have voiced some level of concern about Trump’s contentious remarks.

Will Hurd, Texas, told CNN: “Those tweets are racist and xenophobic.” Voted for the House resolution condemning Trump’s tweets.

Chip Roy, Texas, tweeted: “POTUS was wrong to say any American citizen, whether in Congress or not, has any ‘home’ besides the U.S.”

Pete Olson, Texas, tweeted that he would “urge our President immediately disavow his comments.”

Ron Wright, Texas, said in a statement that he “strongly disagree with the President’s tweet.”

Paul Mitchell, Michigan, tweeted: “We must be better than comments like these … These comments are beneath leaders.”

Bill Huizenga, Michigan, tweeted: “Strongly disagree with what the President said in a series of tweets over the weekend.”

Susan Brooks, Indiana, on Facebook and Twitter: Trump’s remarks were “inappropriate and do not reflect American values.” Voted for the House resolution condemning Trump’s tweets.

Peter King, New York, said through a spokesperson, “The tweets were inappropriate and wrong.”

John Katko, New York, tweeted: “The President’s tweets were wrong,” and “criticism should focus on policy.”

Mike Turner, Ohio, said Trump’s “tweets from this weekend were racist and he should apologize.”

Troy Balderson, Ohio, said he does “not condone yesterday’s tweets.”

Dave Joyce, Ohio, said: “What the President tweeted this weekend was wrong.”

Steve Stivers, Ohio, said the tweets were “unacceptable and stand directly in the way of progress.”

Adam Kinzinger, Illinois, said: “What the President tweeted this weekend was wrong, and does nothing but further divide us.”

Don Bacon, Nebraska, said: “The President’s tweets toward the four Congresswomen were unacceptable.”

Mike Gallagher, Wisconsin, told a newspaper the tweets were “wrong” and that the president was “mean tweeting.”

Jaime Herrera Beutler, Washington, tweeted: “We can & must defend our ideas on how to improve our country w/o descending into divisive & demeaning language.”

Tom Cole, Oklahoma, said he was “deeply disappointed in the president’s comments … Use of such language is inappropriate and demeans the office of the presidency.”

Kelly Armstrong, North Dakota, said: “Attacking any citizen based on where they are from is never OK.”

John Cornyn, Texas, told CNN: “What the President said was a mistake and an unforced error.”

Pat Toomey, Pennsylvania, said: “President Trump was wrong to suggest that four left-wing congresswomen should go back to where they came from. Three of the four were born in America and the citizenship of all four is as valid as mine.”

Susan Collins, Maine, said the president’s tweets were “way over the line, and he should take that down.”

Roy Blunt, Missouri, said: “Just because the so-called squad constantly insults and attacks the president isn’t a reason to adopt their unacceptable tactics.”

Rob Portman, Ohio, told CNN: “The comments are unnecessary and wrong by their very nature.”

Lisa Murkowski, Alaska, said: “There is no excuse for the president’s spiteful comments. They were absolutely unacceptable and this needs to stop.”

Marco Rubio, Florida, told reporters that “the president shouldn’t have written that. I think it damages him.”

Jerry Moran, Kansas, told a newspaper it was “inappropriate to suggest they go home to any place – they are home.”

Cory Gardner, Colorado, told a Colorado radio station: “I disagree with the president. I wouldn’t have sent those tweets.”

Johnny Isakson, Georgia, called the tweets “totally inappropriate” and that “there is not a debate about whether or not it’s acceptable.”

John Thune, South Dakota, told a newspaper: “I think the president needs to tone down the rhetoric, stop the personal attacks.” 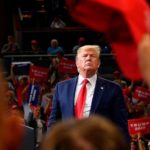 Our Take: The GOP Lines Have Been Drawn over Ilhan Omar