No matter what President Trump does on the international stage, he can never win with the media and his political opponents. If he doesn’t go to war, he’s “acquiescing to dictators.” When he uses force, he’s a “warmonger.”

Daily Caller: Here’s All The Evidence That Iran Is Responsible For The Saudi Attack

Determining the direction of the missile impacts was the central question: If the ordinance came from Iran, evidence should show impacts facing northeast, but if the missiles originated in Yemen, impacts should face south. Aftermath of the attacks initially supported the Houthis’ claim that they had carried out the strikes using drones and cruise missiles, with the impacts facing south and west. But U.S. and Saudi officials argue that the technology used in the attack was well outside of the Houthis’ traditional capabilities, with the Saudis claiming to have recovered missile debris implicating Iran.

“The equipment used is unknown to be in the Houthi arsenal,” Secretary of State Mike Pompeo said. “These line attack cruise missiles we have never seen there and we think we’ve seen most everything. So the intelligence community has high confidence that these were not weapons that would have been in the possession of the Houthis. That’s probably the most important piece of information.”

The Saudis have been waging a military campaign in Yemen against the Houthi rebels since 2015, a conflict widely seen as a proxy war between Saudi Arabia and Iran, which has provided support to the rebels. Pompeo acknowledged the possibility that Iran had shared the missile technology with the Houthis, but he said Iran has never been seen to share that level of technology beyond its borders.

“We also know that these are systems that the Iranians have not deployed anyplace else, that they have not deployed outside of the country, to the best of our knowledge,” Pompeo said, according to Reuters. “We’ve seen no evidence that it’s come from Iraq. It could well have traveled over Kuwait, we’ve not seen that either.”

The most advanced missile the Houthis have been seen to use is the Quds 1, which lacks the range to make it from Yemen to the targets in eastern Saudi Arabia. Meanwhile, the debris the Saudis presented after the attacks strongly resembled the Iranian Ya-Ali cruise missile, which would have been capable of flying past the targets from the northeast and doubling back to create the appearance of missile impacts facing south toward Yemen.

Pompeo has since described the attack as an “act of war” on Saudi Arabia and pledged to work with regional and global partners to prevent future attacks, according to the Huffington Post.

“We are working to build a coalition to develop a plan to deter them,” he told reporters Wednesday. “This is what needs to happen. This is an attack on a scale that we’ve just not seen before.”

Iran continues to deny any responsibility, and has threatened “all-out war” if the U.S. or Saudi Arabia takes military action.

“I think it’s abundantly clear, and there is enormous consensus in the region that we know precisely who conducted these attacks, and it’s Iran. I didn’t hear anyone in the region doubted that for a second,” he told reporters Wednesday in a meeting with the Saudis. “While the foreign minister of Iran is threatening an all-out war and to fight to the last American, we are here to build out a coalition aimed at achieving peace and peaceful resolution.” 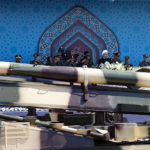 Our Take: The Double-Standard Towards President Trump’s Foreign Policy