President Trump has done it yet again. Just like in North Korea, the President has overcome all the odds and negotiated peace in one of the most volatile regions in the world. With the newly-announced ceasefire in Syria, President Trump is proving that an “America First” approach, combined with “tough love” and threats to walk away from the negotiating table, absolutely can produce peace.

And yet the Democrats can still do nothing but virtue-signal against President Trump, even if it means openly calling for war. They can’t bring themselves to admit to the obvious, that they are now advocating for war, but can only focus on how much they hate Trump.

What else will the Democrats use as an excuse to virtue-signal against President Trump? Call in and tell us what you think: 833-334-6752.

What a terrible betrayal of the Syrian Kurds we saw on Wednesday when the cowards in the U.S. House of Representatives offered up a bipartisan vote of 354 to 60 to condemn President Trump for withdrawing from Syria, including two-thirds of Republicans.

Here are our precious allies, our esteemed brothers-in-arms, the Syrian Kurds, under attack from Turkey, and all these lily-livered, backstabbing betrayers in Congress do is fire off a haughty rebuke.

Article One, Section Eight of the Constitution clearly gives Congress “The Power…

To declare War, grant Letters of Marque and Reprisal, and make Rules conquering Captures on Land and Water;

To raise and support Armies, but no Appropriation of Money to that Use shall be for a longer Term than two Years;

To provide and maintain a Navy;

To make Rules for the Government and Regulation of the land and naval Forces;

To provide for calling forth the Militia to execute the Laws of the Union, suppress Insurrections and repel Invasions;

To provide for organizing, arming, and disciplining, the Militia, and for governing such Part of them as may be employed in the Service of the United States, reserving to the States respectively, the Appointment of the Officers, and the Authority of training the Militia according to the discipline prescribed by Congress.

What is stopping the House of Representatives from putting its money where its mouth is, from using those 354 votes to actually do something for the Kurds, as opposed to stamping their feet and crybabying over Trump? The answer is NOTHING.

If those 354 congressmen and women really and truly want to help the Kurds, want to use the U.S. military to ensure we never abandon the Kurds, nothing less than the Constitution gives them the power to do exactly that.

So why is Congress abandoning the Kurds when they have the constitutional authority to not abandon the Kurds?

If Congress wants to go from “Let’s kill ISIS together” to “Let’s fight a NATO ally together,” by all means, do it.

After all, the whole idea of the War Powers Act is to ensure the president cannot declare war unilaterally, which is what the monarchs of old did constantly.

“The provision of the Constitution giving the war-making powers to Congress, was dictated, as I understand it, by the following reasons: Kings had always been involving and impoverishing their people in wars, pretending generally, if not always, that the good of the people was the object,” a young congressman named Abraham Lincoln wrote. “This, our [Constitutional] Convention understood to be the most oppressive of all Kingly oppressions and they resolved to so frame the Constitution that no one man should hold the power of bringing this oppression upon us.”

And yet, despite countless wars in the 77 years since, Congress has not declared war once since World War II.

The reason for this is obvious: Congress is abdicating its responsibility to avoid having to deal with the political blame should things go sideways, and in war things always go sideways.

So instead of accepting the awesome responsibility of declaring war, the gutless wonders in Congress have surrendered all of that authority to one man, the president, which is exactly what our Founders wished to avoid.

But it is so much easier that way, you see, because avoiding responsibility allows these cowards to snipe, second-guess, heckle, posture, and backseat drive from the cheap seats. Which is exactly what they are doing with the Kurds.

Do you want to know why Congress won’t vote for a war resolution to save the Syrian Kurds? Or even an “authorization for the use of military force,” as it did after Sep. 11, 2001?

Let me count the ways…

The Kurds in Turkey and Syria are at war with Turkey and have been for freakin’ centuries (the Kurdistan Regional Government (KRG) if Iraq has maintained friendly ties to Ankara).

Turkey is our NATO ally, so Congress wants Trump to risk war with a NATO ally, but they sure as hell won’t do it themselves.

A good relationship with Turkey is vital to our Middle East posture.

We are already worried about Turkey aligning with Russian President Vladimir Putin and Iran, which Erdogan seems increasingly interested in doing.
The Kurds only fight for the Kurds. It was in their (and Syria’s) best interest to fight ISIS – and it still is.

The Turkish government believes our Syrian Kurdish allies (the YPG, or People’s Protection Units) fight alongside the PKK (Kurdistan Workers’ Party), a group of fevered communists that have called for separatist uprisings among the Kurds in Turkey. In other words, they are causing all kinds of trouble in Turkey. The YPG tends to be pan-Kurdish and build bridges to all Kurdish groups, but is a distinct entity than the PKK, which largely focuses on attacking Turkish police and soldiers.

Oh, and did I mention the PKK is designated as a terrorist organization by our own government? So America should shield terrorists as these terrorists conduct operations against a fellow NATO ally [assuming, and it’s a big if, that Erdogan is telling the truth about the PKK and the YPG]? Hey, if you think that’s a good idea, VOTE ON IT!

The Kurds are stateless and looking to create their own territory out of the land they are indigenous to, which consists of chunks of Syria, Iraq, Iran, and Turkey. The YPG are focusing on pieces of Syria right along Turkish border, which Turkey, for obvious reasons (the PKK), finds intolerable. Not for nothing, for years the Turks have been warning about securing the border region against the PKK. Which means that the vaunted international community has had those years to work this out peacefully, but they would rather condemn Israel and swoon over Greta.

It’s all an unholy mess, but if Congress wants to use our troops to fight on the side of designated terrorists against a NATO ally – then STFU and do it!
Yes, we want to help the YPG, but our allies-by-treaty say this helps the PKK, and a war between Turkey and the Kurds helps another enemy of ours, Syria, while pushing Turkey deeper into the arms of Russia and Iran.

And now we come to my favorite…

There is no endgame, no exit plan, no light at the end of a tunnel in a local border skirmish that predates our own Civil War and will outlive the great-grandchildren of everyone reading this.

Trump at least has an endgame, he got the hell out, which should not have surprised anyone familiar with his 2016 presidential campaign.

As far as whether or not the removal of those 50 or so troops was Turkey’s green-light to move in, let me state this as clearly as I can: I. Don’t. Care. No one was doing anything to solve the problem peacefully, so there was no exit plan for us, we were going to have to stay there forever, be the world’s policeman forever, which made those 50 or so troops a potential trigger for a war with Turkey.

And it wasn’t legal for us to be there, because ISIS had no presence there, and Congress only authorized military attacks on al-Qaeda and its offshoots (ISIS among them). Congress could have made it legal, but they didn’t.

If Turkey decided to move to secure the border region with us still there, that would mean moving against our guys, and then it’s more young American death and dismemberment in the sand because we got dragged into something that has nothing to do with us yet again.

But, hey, if Congress wants to not abandon the Kurds, wants to take ownership of this, wants to grow a spine for once, they have the power.

And if they don’t use that power, it only proves what a bunch of hypocritical, mewling little cowards they all are. 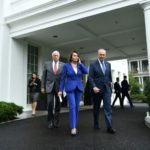 Our Take: The Democrats Want War, but Won’t Admit It