President Trump is absolutely right when he says that hate has no place in our country. Unfortunately, Democrats have no intention of following his example.

In the wake of the terrible shootings in El Paso and Dayton, the Left could only focus on politicizing these tragedies for their own political gain, which included recklessly and falsely labeling the President a “white nationalist.” Robert Francis O’Rourke – still desperately struggling for relevance in the 2020 presidential race – is undermining the healing process by saying that President Trump “should not come to El Paso.” And now the Socialist Left’s favorite poster-child, Alexandria Ocasio-Cortez, has accused the President of being “directly responsible” for the shooting in El Paso.

This rhetoric is beyond disgusting, divisive, and downright evil. President Trump is clearly committed to helping America heal, and will do whatever it takes to do so. Yet Democrats only care about political grandstanding and virtue-signaling, even if this means standing on the graves of the victims before their bodies have even turned cold.

Never mind that one could just as easily blame Ocasio-Cortez for the terrorist attack on an ICE facility by a member of Antifa, as the individual directly cited her comments comparing such facilities to “concentration camps;” it could be just as easy to blame Senator Elizabeth Warren for the devastating shooting in Dayton, as the shooter was a devout fan of hers. Although the double-standard is glaringly obvious, the fact that no one on the Right has tried blaming either of them in this way is further proof that one side still has morals and a backbone, while the other side has none. One side is trying to encourage peace and unity, while the other side simply wants to divide and conquer through hate.

Rep. Alexandria Ocasio-Cortez (D-NY) on Monday joined the chorus of Democrat lawmakers blaming President Donald Trump for the deadly shooting in El Paso, Texas, over the weekend, saying his discourse on immigration is “directly responsible” for the tragedy. The freshman congresswoman did not address how the Dayton, Ohio, shooter echoed her own controversial rhetoric on social media.

Ocasio-Cortez took aim at the president during her remarks at a vigil in Brooklyn paying tribute to the shooting victims of El Paso and Dayton, Ohio.

“I’m tired of the questioning if the president is racist. He is,” Ocasio-Cortez told nearly 500 attendees, reported the New York Daily News.

The far-left “Squad” member then claimed white supremacy is a global “international terrorist problem” that must be stopped.

“There are so many different issues that are weaving themselves into a braid of violence into our country. One of them is white supremacist terrorism,” she stated, seemingly referring to the Churchchrist, New Zealand gunman, who killed 51 people in two consecutive shooting attacks at mosques. 2020 White House hopefuls Sen. Cory Booker (D-NJ) and former Rep. Robert Francis “Beto” O’Rourke (D-TX) have also attempted to tie the president to the shooting.

Ocasio-Cortez’s comments come three days after a gunman killed 20 people at an El Paso Walmart, with the death toll later climbing to 22. The suspect, 21-year-old Patrick Crusius, has been charged with capital murder, making him eligible for the death penalty. The Justice Department is weighing bringing hate crime charges against Crusius, which also carry the death penalty. He is believed to have posted a manifesto to 8chan railing against Hispanic immigrants prior to carrying out the attack. Hours later, another gunman killed nine people, including his own sister, after opening fire in a busy bar district in Dayton, Ohio. Police killed gunman 24-year-old Connor Betts within one minute after he began shooting.

Twitter suspended the alleged account, @iamthespookster, on Sunday evening after several outlets had reported it belonged to the Ohio shooter, who murdered nine people and wounded dozens more before being fatally shot by police.

The @iamthespookster account also re-tweeted a post by a Twitter user going by the name “@poohcowboy_drew,” who produced “a list of people who work for ICE” and encouraged readers to harass them into quitting their jobs.

The account also retweeted at least one account referring to immigrant detention centers as “concentration camps,” echoing the language of Ocasio-Cortez. It also appears he called the far-left activist who firebombed a Tacoma, Washingon, ICE center a “martyr.”

On Monday, President Trump condemned the pair of shootings, declaring the United States “must condemn racism, bigotry, and white supremacy.”

“These sinister ideologies must be defeated. Hate has no place in America,” the president said.

“These barbaric slaughters are an assault upon our communities, an attack upon our nation, and a crime against all of humanity,” he added. “We are outraged and sickened by this monstrous evil.” 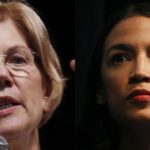 Our Take: The Democrats Spread Far More Hate than any Republican