First their “Russian collusion” hoax failed. Then their “obstruction of justice” message also fell flat. And yet, even with reality working against them, the Democratic Party is still determined to try to impeach President Trump over nothing.

The House Judiciary Committee hearings yesterday with former Trump campaign manager Corey Lewandowski was just another prime example of how fruitless the Democrats’ efforts have been, and will continue to be.

Lewandowski skillfully made fools of the Democrats involved, and revealed just how absurd the entire process was, from basic parliamentary procedure, to the Democrats’ grandstanding, to the baselessness of the allegations themselves. Perhaps most satisfying was the manner in which Lewandowski proved just how empty and harmless Jerry Nadler’s threats truly are; if he can’t even maintain control of one of his own hearings, then he is not about to impeach one of the most successful Presidents in American history.

Most likely, this will not be the end of the Democrats’ sad impeachment attempts against President Trump. But if most of them can be even half as entertaining as this one was, then at least we can get some enjoyment out of their future failures.

The hearing quickly devolved into chaos just minutes into House Committee Chairman Jerry Nadler’s questioning of Lewandowski, with Democrats demanding the clock be stopped due to his “filibustering,” and Republicans calling for an adjournment of the hearing.

Rather than give Democrats any new ammunition, Lewandowski used the hearing as opportunity to recall President Trump’s historic campaign, tease a potential run for the Senate in 2020, and mock flustered Democrats.

In one exchange, after a long rant by Rep. Sheila Jackson Lee (D-TX), Committee Chairman Jerry Nadler (D-NY) said her allotted time was up but that Lewandowski could respond to her question, he quipped, “I don’t believe there was a question, Congressman.”

After she retorted, “Yes there was,” Lewandowski responded, “Could you repeat the question? I didn’t hear it. It was just a rant.”

At one point, Rep. Hank Johnson (D-GA) commented, “Mr. Lewandowski, you are…like a fish being cleaned with a spoon — it’s very hard to get an answer out of you.”

In his opening statement, Nadler argued the White House’s executive privilege claim was a “coverup” and that Democrats would “not be daunted.”

But even Never Trumper Rick Wilson lamented that “Team Trump won the day:”

Team Trump won the day because Democrats failed to provide a comparable show.

Taking Lewandowski’s abuse and contempt and grinding through an endless series of dull questions is pathetic television, and Americans are conditioned to respond only to exciting television.”

Rep. Doug Collins (R-GA), the top Republican on the committee, blasted Democrats for holding a hearing to talk about how the president should be impeached without actually taking an impeachment vote on the House floor, where there is not enough support.

Collins also mocked Democrats for billing the hearing as part of an impeachment inquiry, and not a regular oversight hearing.

“They can’t sell the product, so they just keep packaging it differently,” he said. “I think we should call this for what it is, it’s just another simple oversight hearing …it’s become ‘Let’s read the Mueller report for audio book.’”

Collins also noted that Lewandowski had testified in front of Congress three separate times, as well as to former Special Counsel Robert Mueller, and he blamed Democrats for not working with him and other witnesses to make the hearings more fruitful.

“They don’t try to get real information, that’s what oversight is … I understand it’s tough making a promise and not keeping it,” Collins said. “The majority made a promise, we’ll impeach him, we’ll investigate him.”

The hearing is the committee’s first on this issue since coming back from summer recess earlier this month. It is also the first hearing on the issue of obstruction or impeachment under new rules the committee voted on last week, to make hearings appear more like a formal impeachment inquiry.

As part of those new rules, Democrats had an outside attorney, Barry Berke, continue to question Lewandowski after lawmakers finished their questioning.

Collins blasted the move as a violation of the House rules and argued the Judiciary Committee’s Article I oversight authority does not extend to private attorneys.

When Berke asked about a comment he had made in the book, Lewandowski responded, “Yes, I wrote Let Trump Be Trump, available at fine book stores everywhere.”

After Berke queried him about another comment he made in his book — how he felt like a little kid in the Little League getting to play in the World Series, Lewandowski got in a personal dig at Berke.

“Yes, having the privilege to be inside the Oval Office speaking to the president of the United States after growing up poor in Lowell, Massachusetts, not attending Harvard or graduating Phi Beta Kappa from Duke — yeah it’s a pretty amazing opportunity,” Lewandowski quipped.

Berke questioned whether he took the Mueller report “lightly,” asking whether Lewandowski had indeed recently gone to an event where he signed copies of the report. Lewandowski acknowledged doing so, but pushed back that he did not take it seriously. “I’m outraged at the characterization of your statements,” he said.

Berke also played clips of Lewandowski giving television interviews in an attempt to contrast what he said then to what was in the Mueller report. Lewandowski told him point blank: “I have no obligation to be honest to the media because they’re just as dishonest as anybody else.”

After the hearing, Nadler warned, “Make no mistake, we will hold President Trump accountable.” 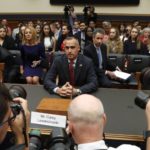 Our Take: The Democrats’ Impeachment Hearings are a Farce