As President Trump continues to rack up one win after another for America, the Democrats grow more insane at the fact that he is succeeding. The day after he announces that the United States has just killed the world’s most-wanted terrorist, Speaker Nancy Pelosi announced her intentions to hold a vote that will “formalize” the Democrats’ baseless impeachment inquiry.

They would rather put their own political agenda ahead of the country’s safety. They want to push forward on an impeachment process in which no crime was committed. And they are determined to appease the far-left at all costs. They have nothing left but to attack and demean the President, and undermine the will of 63 million Americans. The Democratic Party truly has lost whatever may have remained of its collective mind.

Is there nothing the Democrats won’t do to destroy America? Call in to AMERICA First and tell us what you think their limit is (if any!): 833-334-6752. 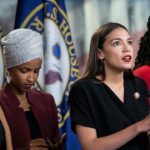 Our Take: The Democrats Have Truly Lost Their Mind