Of the endless list of Democrat hypocrisy over impeachment, the most ironic aspect is that once more, despite mercilessly and baselessly accusing President Trump of “election interference,” it is the Democrats who are guilty of subverting our elections.

Make no mistake, impeachment is about 2020. As we have said before, the Democrats are doing this solely because they know they cannot win in a fair fight with the incumbent president. So they have taken to sabotaging his presidency and tarnish his legacy to make him known only as “the impeached president” going into his re-election bid. But this tactic could very well have the opposite effect as to what they desire, and secure another four years of President Donald Trump.

Do you think impeachment will help or hurt President Trump’s re-election campaign? Call in to the show at 833-334-6752.

Breitbart: Democrats Are Meddling in the 2020 Election

Speaker of the House Nancy Pelosi (D-CA) made a colossal mistake this week by agreeing to an impeachment inquiry before she had seen the transcript of President Donald Trump’s conversation with President Volodymyr Zelensky of Ukraine.

It was a strategic mistake, because the evidence contradicted her claims. But it was also a terrible mistake for the country, because it cast the fairness of the 2020 presidential election into serious doubt.

Trump supporters will rally to support him at the polls — a lesson Democrats should have learned when Republicans lost the 1998 midterm elections in the midst of impeaching President Bill Clinton (who, unlike Trump, had actually committed crimes). Moreover, public support for the inquiry will collapse once the facts are known — through the media fog that is giving the misleading “whistleblower” complaint more credibility than the underlying evidence.

But Democrats hope that impeaching Trump — or even suggesting impeachment — will place a permanent cloud over his head that will make it impossible for him to win in 2020.

If they are right, Trump supporters will look at impeachment as the reason for his defeat. And the fact that Democrats have relied on a CIA source who had no direct evidence of wrongdoing in an attempt to bring down President Trump will be seared into Trump supporters’ collective memory.

The message Democrats are sending is that not only do they refuse to accept the results of the 2016 election as legitimate, but they are willing to use the intelligence community to reverse the results of that election.

In January 2017, before President-elect Trump took office, Senate Minority Leader Chuck Schumer (D-NY) warned: “Let me tell you: You take on the intelligence community — they have six ways from Sunday at getting back at you.” The CIA, and the Democrats, are delivering on that threat.

Of course, Trump had every reason to be suspicious of the intelligence community: they had spied on his campaign and his transition team, and leaked information to the media to undermine him. Outgoing Obama administration officials were hurriedly unmasking U.S. citizens caught on wiretaps, at least one of which was illegally leaked to the media. Then-FBI Director James Comey brought Trump the phony “dossier” — not to warn him, but to intimidate him, and to gather more information from the way the President-elect would react.

Democrats like Rep. Adam Schiff (D-CA) defended the Obama administration’s spying by arguing we had to know if a presidential candidate was “compromised” by a foreign government. (Note the double standard with Biden.)

And the surveillance continued. In the early days of the administration, Trump’s telephone calls with foreign leaders — including close allies, like Australia’s prime minister — were leaked from someone in the intelligence loop. That is the likeliest reason for the White House placing the Ukraine call on a more secure system. The White House knew that the intelligence community had abused its power before and might do so again. (That suspicion was, of course, soon confirmed.)

The Democrats, the media, and rogue CIA agents are making it impossible for Trump to do his job. No foreign leader will talk to our president if he or she knows the conversation will be leaked. That is the real threat to national security, not the contents of Trump’s chitchat with Zelensky.

It is also a threat to our democracy. If Democrats succeed, many Trump supporters will lose faith in the whole system, with dangerous consequences.
That is the Pandora’s box Pelosi has opened. Only a Trump victory can close it. 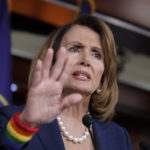 Our Take: The Democrats: Guilty of Election Interference