With today’s Democratic party, it’s hard to determine what’s more pathetic about their ongoing presidential primary dynamic: That most of the 20+ candidates are rushing to copy the one-dimensional platform of a 29-year-old freshman member of Congress, or the fact that this drive to “out-left” each other is only driving them even further to the radical extreme, in a self-fulfilling political prophecy. Socialism begets more socialism, which begets even more socialism.

As Alexandria Ocasio-Cortez teases her possible endorsement in the 2020 race, the major candidates have been offering their (pardon the pun) carbon copies of her Green New Scam, making the total scam one of the cornerstones of the 2020 primary. In a desperate attempt to appeal to this growing far-left base, frontrunner Joe Biden has offered his own half-baked version of the Green New Scam…which he completely ripped off from someone else.

On other issues too, the field dashes to the Left in an attempt to “out-liberal” each other, whether it be on immigration or gun control. Even on impeachment, where even AOC cannot offer up a single legitimate reason to do so, an alarmingly high number of presidential candidates and Democratic members of Congress alike are pushing for impeaching a President who has done nothing wrong, aside from the crime of being a very successful President.

And just when you thought it couldn’t get any more extreme, NBC has announced that one of the moderators for the first Democratic primary debate will be none other than Rachel Maddow.

The implications for the Democrats in power could not be clearer. Speaker of the House Nancy Pelosi knows this; she knows that such a dangerously far-left platform will endanger their majority and their moderate members who represent districts that voted for President Trump in 2016. But at this point, a hunger for Socialism and scoring points with the leftist media has far surpassed any inclinations towards political common sense. The White House may not be the only thing that Democrats will lose in 2020 as a result.

House Speaker Nancy Pelosi was the leader, nay, the face of the Democratic Party. Now, she is only so in name. Her speakership is, at this point, a title with less authority than “professor emeritus” at a small state school.

I think her instincts as to how to approach Trump are correct: Moderate the party, appeal to the middle, and try to pull the American public back to your side. This instinct, naturally, means that calling for impeachment, full-on socialism, and other radically leftist ideas need to be locked away until the party is back in power.

That instinct, however, also puts her at odds with the loudest parts of the party’s base, and it’s that base the rest of the Democrats in Congress appear to be appealing to. You have Eric “Who? Wait, that guy? He’s still running?” Swalwell calling for not only President Donald Trump’s impeachment but Attorney General William Barr’s as well. Alexandria Ocasio-Cortez is out there spewing whatever she can – no matter how little she knows about a subject, and Bernie Sanders is using his Democratic Socialism as the centerpiece of his “I’m not Trump” campaign.

It’s so bad that Joe Biden, who appeared to be going for the more centrist but progressive-leaning candidate and probably the one candidate most in-line with Pelosi’s philosophy, went back on a position he’s held for decades – supporting the Hyde Amendment – just because Alyssa Milano told him to.

The Pelosi wing of the Democratic Party is shrinking, which… should really concern the Democrats, because they are now giving in totally to their baser instincts.

It won’t concern them, though. They are really, really into the idea that Trump’s typically low approval ratings mean that he should be impeached and that the American public is clamoring for all the leftyist of leftist positions, ignoring the fact that those issues also don’t poll too well, especially when the full context is given on those issues.

But, they are choosing to believe that this is the path to take. The 2016 election never really happened, but Trump did steal his way into the office somehow. They can reverse it though by going even further to the left than Barack Obama – the man who very nearly killed their party – went when he was President. That’s the strategy.

If I were Pelosi, I would go ahead and announce my resignation, offer up my spot, take a couple years’ vacation and come back as a lobbyist while behind the scenes telling everyone she can how the Democratic Party, which won’t see a presidential victory in 2020 and quite possibly even 2024, decided to stop listening to her and start listening to idiots.

I believe it worked out then for John Boehner.

The Pelosi Speakership, though, is over. Her own committee chairmen don’t buy into her philosophy. They’d rather have the TV time and the support of presidential candidates who don’t stand a chance in 2020. She has even less power as Speaker than Boehner did, and he was basically out the door a year before his final re-election.

She is a relic of a bygone era, and that era appears to have ended in 2018. 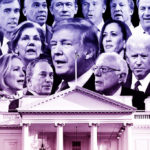 Our Take: The Democrats Continue to Rush Further Left