The first major election of 2019 is taking place today in North Carolina’s 9th congressional district, and the result will mean several different things.

First, it will determine whether or not the Democrats can get away with blatant election fraud. The man who was first rightfully elected to this seat, Republican Mark Harris, won fair and square; the allegations by Democrats that he somehow engaged in ballot-harvesting are not only unsubstantiated, but flagrantly hypocritical. In California, the practice of ballot-harvesting was legalized in 2016, and directly contributed to the loss of several Republican-held seats in the House of Representatives last year. Yet while the Democrats lost their collective minds over Harris, they not coincidentally turned a blind eye to the practice in California.

Secondly, this election will be a referendum on whether or not the Democrats’ ugly and disgusting tactics up to this point in Donald Trump’s presidency have worked. They first banked on the “Russian collusion” hoax, and the subsequent two-year investigation, to bring down the Trump presidency. When that failed, they turned to the equally-ludicrous charges of “obstruction of justice,” which has also failed. They have been pursuing one baseless conspiracy after another in the hopes that hindering the Trump Administration for this long would deflate the enthusiasm of the President’s base. They are hoping that this loss of momentum will materialize in the Democrats flipping this seat.

Just as with Brexit in the United Kingdom, the swamp and the political establishment that resides in it is hoping that they can simply delay, obstruct, and de-energize their opposition enough that we will eventually just throw our hands up in surrender and fatigue. In both cases, and many other instances here and abroad, we must not give in. We must be willing to prove, through this special election, that the American people will not be intimidated, bullied, or silenced into submission.

President Donald Trump urged supporters in North Carolina on Monday to defeat Democrats in the special election for the Ninth Congressional district in the state.

“Tomorrow, we take the first steps to firing Speaker Pelosi and winning back the House in 2020,” Trump said. “We need everybody to get your friends, get your family, and get your neighbors and get out and vote for Dan Bishop.”

Trump touted Bishop as an ally in Congress, warning that a vote for the “other Dan,” Dan McCready, was a vote for open borders, sanctuary counties, and to take away gun rights.

“Our great Republican candidate Dan Bishop will fight with everything he has to stop sanctuary cities and defend the people of this great state,” Trump said.

Harris had won by 905 votes, but the North Carolina state election board refused to certify the election results.

After a new election was called, Harris dropped out of the race and Republican candidate Bishop ran instead.

Former Vice President Mike Pence was also in the state campaigning for Bishop and spoke at the president’s rally. 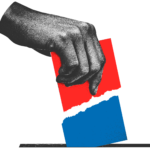 Our Take: The Democrats Cannot be Allowed to Steal Another Election