Few things are more entertaining than watching the Left enter full panic mode. Normally, this is only caused by President Trump securing a major victory, whether it be the roaring economy, destroying ISIS, or surviving impeachment. But it is even more amusing when it is an internal crisis with the Democratic Party that causes them to lose their minds.

Right now, the Democrats are in chaos over the possibility that socialist senator Bernie Sanders could actually win the nomination. First they tried to resort to shady tactics in the Iowa caucus disaster. Then they tried to use the same “Russian collusion” hoax on Sanders that they used on President Trump.

Now, the DNC establishment is so desperate to stop Sanders that they’re convincing multiple candidates to drop out of the race, even when they were performing well and before the crucial Super Tuesday votes set to happen tonight. With Tom Steyer, Pete Buttigieg, and Amy Klobuchar all withdrawing over the course of just two days – and with the latter two suddenly endorsing former Vice President Joe Biden – it is all too obvious that the Democratic establishment is trying to throw all of its weight against Sanders, the leading candidate, once again.

Again, the Democrats are resorting to shady political backroom deals and strategic rigging to try to stop a more grassroots candidate. This not only proves that they learned nothing from 2016, but also that they are willing to sacrifice party unity in order to secure their preferred candidate and that they are fundamentally, and ironically, UN-Democratic. 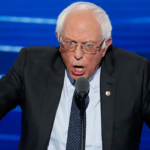 Our Take: The Democrats are Trying to Steal it From Bernie…Again