The 2020 election will not only be about giving Donald Trump four more years in the White House, but it will also be about ensuring that the Democrats do not gain anymore power than they already have.

As impossible as it may sound, the Democrats have become even more radical and dangerous than they were in 2016. They have fully embraced Medicare-for-All, they eagerly pursue gun confiscation, they rabidly oppose Free Speech, they shamelessly advocate for open borders, and declare America itself to be an evil country.

As we covered on the show yesterday, the Democrats are now represented by the likes of Ilhan Omar, who considers America to be guilty of “Western imperialism” that must be dealt with by electing an avowed socialist like Bernie Sanders. There is no longer any pretense of simply having a different vision for a better America like in the past; the Democrats hate America, and want to destroy it. 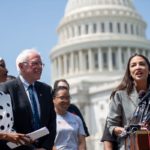 Our Take: The Democrats are too Dangerous to be Given Anymore Power