The Democrats’ hypocrisy has been exposed yet again, in several ways, over the course of the last few days.

First, they have proven that they are anything but democratic. Just as Bernie Sanders was on the rise in their presidential primaries, some behind-the-scenes deals were clearly made to force two candidates – Pete Buttigieg and Senator Amy Klobuchar – to drop out and endorse “Quid Pro Joe” Biden. This was a blatant Establishment effort to stop Sanders, and as Super Tuesday’s results indicate, it seems to have worked.

But even more importantly, the Democrats have been revealed as rank hypocrites when it comes to their endless virtue-signaling over identity politics. For all their rants about the supposed merits of multiculturalism, and how white Americans are unduly advantaged, the party is now faced with the reality of its top three candidates all being white men in their late 70s.

Just as the far-left is now stuck with three candidates who all represent what they hate the most, the rest of Democrat America is stuck with a similarly awful choice: A soulless and bland oligarch, a senile and corrupt career politician, and a deranged and unapologetic socialist. 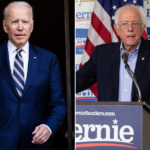 Our Take: The Democrats are Now the Party of Old White Men