For the longest time, the FakeNews media, the Democrats, and Deep State actors have long dismissed claims of a “coup” against President Trump as some sort of Alex Jones-level conspiracy theory.

But it has now been revealed that not only do they not consider it to be fiction; but they themselves will gladly use the term, and the word “rebellion” to describe their crusade against President Donald Trump, as reported yesterday.

When they are willing to openly call for a rebellion and support impeachment on social media, in the immediate aftermath of President Trump’s inauguration, it shows a level of audacity and arrogance, but also a smug fearlessness, for they do not believe that they can be held accountable to anything, by anyone. They truly do consider themselves the unelected governing power of this nation. 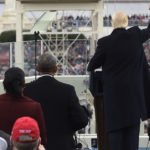 Our Take: The Deep State Supports a Coup