As media scrutiny grows over Big Tech’s censorship and biases towards right-wing voices, our technological overlords in Silicon Valley may at last find themselves facing a day of reckoning. Even more shocking, is that this has proven to be the one issue on which both Democrats and Republicans can agree.

After the Department of Justice announced its intent to prepare antitrust investigations into Apple and Google, with the Federal Trade Commission announcing similar actions against Facebook and Amazon, Congress has also followed suit. The House Judiciary Committee has declared that it will initiate a blanket bipartisan investigation into all of Big Tech, with Democrats and Republicans united on this front.

After years of running roughshod over the First Amendment rights of conservative voices across the Internet, the bell will now finally toll for the tech giants who think they have complete control over the flow of information and the “marketplace of ideas.” These recent developments may already be bearing fruit, as the normally censorious YouTube shut down a campaign to ban Steven Crowder for politically incorrect language. The tide may be turning as Big Tech realizes that the full force of the United States government is coming after them.

If these investigations yield the ideal outcome – an end to blatant censorship and the beginning of a new era of true free speech online – then it will easily be the single greatest bipartisan accomplishment of the Trump era. And it will be remembered as a victory that President Trump initiated.

Silicon Valley is bracing for a showdown as Congress and regulators step up their oversight of tech giants and how they wield their power.

The federal government’s top antitrust enforcers, the Department of Justice and Federal Trade Commission (FTC), have reportedly reached an agreement on how to divide up their responsibilities for investigating Silicon Valley’s biggest companies, with the Justice Department setting its sights on Apple and Google and the FTC taking the lead on Facebook and Amazon. The agencies are said to be weighing whether to open formal investigations.

On Monday, Congress also jumped in; the House Judiciary Committee announced a bipartisan investigation into Silicon Valley and competition among online businesses.

The wide-ranging investigation will seek to determine whether tech giants have hurt competition and whether Congress needs to update the nation’s antitrust laws to address the modern internet economy.

“It’s an opportunity to look at our antitrust statutes to determine whether they need to be modernized and updated,” Rep. David Cicilline (D-R.I.), the chairman of the House Judiciary antitrust subcommittee, told reporters on Monday.

The tech industry has faced tough antitrust scrutiny from European regulators but long enjoyed relaxed oversight from Washington. Now, big tech faces a high-stakes battle over their business model that could last for years.

And the industry finds itself with few allies, with President Trump, Republicans and Democrats all united behind the threat of tougher enforcement.

Tech giants once found themselves courted by Washington, but those attitudes have shifted amid questions over whether the companies have unfairly stifled competition and how their practices affect consumers.

Congress is pushing for national privacy legislation to regulate how the industry collects and uses personal data. And Facebook is facing the potential of a record multibillion-dollar fine from the FTC after a yearlong probe into its handling of the Cambridge Analytica scandal.

So far, the industry and its investors have been confident that the tech behemoths can easily comply with any new privacy regulations and absorb the largest fines regulators can throw at them. But scrutiny into tech companies’ market power could shake that confidence.

The announcement that House lawmakers from both parties would investigate rewriting antitrust laws to rein in Silicon Valley sent some of the largest tech companies’ shares tumbling this week, including those of Amazon, Facebook and Google.

Lawmakers are moving quickly. A Democratic House aide told The Hill that the first hearing in the investigation will be on Tuesday. The witness list currently includes Gene Kimmelman, the president of the consumer group Public Knowledge and former chief counsel in the Justice Department’s Antitrust Division; Sally Hubbard of the Open Markets Institute; and David Chavern, the president of the newspaper trade group the News Media Alliance (NMA), who have all called for tougher oversight of the industry. The aide said that list of witnesses is likely to grow.

Industry leaders have pushed back strongly on antitrust criticisms, arguing that they all face strong competition from rivals and denying that any of them have a monopoly. And they are likely to fight any antitrust action vigorously.

“I don’t think anybody reasonable is going to come to the conclusion that Apple’s a monopoly,” Apple CEO Tim Cook said in an interview with CBS aired Tuesday.

In Europe, U.S. tech giants have faced much tougher antitrust regulations. European regulators have hit American companies with record fines and opened up a slew of investigations.

In the U.S., though, there have been questions about whether regulators are up to the task and whether the laws give the government enough power to take on the industry.

Any antitrust action would likely face a long fight in the courts, where tech defenders believe they could fare well.

The prevailing antitrust logic that courts have relied on focuses on companies’ effects on consumer prices. Industry defenders emphasize that internet platforms like Facebook and Google offer free services, and that Amazon has brought down consumer prices.

Others have also raised questions about whether regulators are strong enough to take on big tech.

“I don’t think there’s any lack of will at the agencies,” said Sam Weinstein, an assistant professor at Cardozo Law School. “If they thought they had a winning case, they would bring one. My feeling is the agencies are just limited by the courts.”

There are also questions about whether lawmakers can actually push through changes to antitrust laws. Some cracks are already showing.

On Monday, Rep. Jim Sensenbrenner (Wis.), the leading Republican on the Judiciary antitrust subcommittee, cautioned against the investigation beginning with any “predetermined conclusions.”

And a GOP committee aide downplayed how far-reaching the investigation will be.

“The term investigation only applies in that Republican and Democrat Members are looking broadly into questions that have arisen about competition in tech,” that aide said in an email. “There has not been bipartisan agreement to scrutinize, subpoena, compel testimony from, or start a critical investigation into any individual, large tech company.”

Weinstein said the talk of updating antitrust laws was an important shift.

“It does seem like there’s a moment here where people are concerned enough about concentration and size of these companies and what some people see as the insufficiency of antitrust laws to deal with these problems,” he said. But he cautioned that it would “surprise” him if the laws were changed.

Still, the push will give lawmakers the opportunity to shed light on tech companies’ practices and the industry’s critics a public platform to air their concerns.

Danielle Coffey, a senior vice president at the NMA, which will be represented at the hearing next week, told The Hill that her group will be pushing for Congress to pass bipartisan legislation introduced by Cicilline that would give news outlets the right to collectively bargain for a greater share of internet advertising revenue, which is largely being swallowed up by Facebook and Google.

“The antitrust laws have allowed the platforms to continue to grow while not creating a level playing field,” Coffey said. 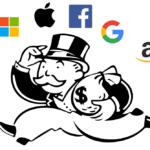 Our Take: The Day of Reckoning is Coming for Big Tech