With the ongoing political battle over the rights of the unborn, the few times that the partisan divide is broken should be acknowledged; especially when it involves Democrats taking a bold stand against their party’s extremist stance in support of infanticide.

All of the most recent pro-life laws were passed by Republican legislatures and signed by Republican governors, in the states of Georgia, Kentucky, Mississippi, Ohio, Alabama, and Missouri. But now, with the passage of yet another “heartbeat bill” in Louisiana, there has been a spotlight shined on one of the very few instances of bipartisanship left to be found in the country today.

That state’s heartbeat law was passed by a Republican-majority legislature, but was written by a Democratic State Senator, John Milkovich. Now, the state’s Democratic Governor, John Bel Edwards, has voiced his unwavering support for the bill and intends to sign it.

Many may see the recent surge in pro-life laws as a backlash to the radical pro-abortion laws passed in New York and Virginia, as another swing of the pendulum. But while that divide has usually been portrayed as simply Democrat vs. Republican, this development out of Louisiana proves that it is not so black-and-white.

In addition, it stands as a testament to the bravery of such Democrats as Milkovich and Edwards, who will surely be condemned by their pro-death culture party leadership, just as other moderate Democrats have. But they have cast their votes regardless, standing for the sanctity of human life rather than caving to their party’s dogma.

Louisiana’s state legislature on Wednesday overwhelmingly passed a so-called “heartbeat” pro-life bill, becoming the latest in a slew of states to enact strict new restrictions on abortion that many conservatives have hoped will end with the Supreme Court revisiting its landmark 1973 Roe v. Wade decision.

Gov. John Bel Edwards, a Democrat, has said he will buck the national party establishment and sign the measure into law. Another Democrat, state Sen. John Milkovich, sponsored the bill — underscoring the deep pro-life culture in Louisiana, even among liberal politicians.

The bill, which cleared the Louisiana House by a 79-23 vote, requires an ultrasound to be conducted prior to any abortion procedure being performed. If a fetal heartbeat is detected, the bill bans abortion unless, under penalty of perjury, the abortion provider declares the procedure necessary “to prevent the death of the pregnant woman or to prevent a serious risk of the substantial and irreversible impairment of a major bodily function of the pregnant woman.”

The bill also includes an exemption in the case that a physician certifies that the “unborn child has a profound and irremediable congenital or chromosomal anomaly that is incompatible with sustaining life after birth.”

The text does not include an exception for rape or incest, but it includes penalties only for abortion providers, and not women seeking abortions. Doctors breaking the law could face up to two years in prison and lose their medical license.

In a statement posted on Twitter shortly after the vote, Gov. Edwards emphasized that “being pro-life means more than just being pro-birth,” touted his criminal justice reform and foster care initiatives, and vowed to sign the bill into law.

“I know there are many who feel just as strongly as I do on abortion and disagree with me — and I respect their opinions,” Edwards wrote. “As I prepare to sign this bill, I call on the overwhelming bipartisan majority of legislators who voted for it to join me in continuing to build a better Louisiana that cares for the least among us and provides more opportunity for everyone.”

None of the bans has taken effect, and all are expected to face legal challenges.

New York Sen. Kirsten Gillibrand, a 2020 presidential contender, suggested the laws made her “infuriated,” writing on Twitter that “the threat to Roe v. Wade is real.”

Louisiana’s prohibition, by its explicit terms, would take hold only if neighboring Mississippi’s law is upheld by a federal appeals court. A federal judge temporarily blocked the Mississippi law Friday.

In that respect, the new law is somewhat similar to a 2006 “trigger law,” signed into law by then-Louisiana Gov. Kathleen Blanco, a Democrat.

That law effectively would ban all abortions, except where the mother’s health is in jeopardy, immediately if the Supreme Court ever reversed Roe, the seminal case that established a constitutional right to privacy and prescribed a limited right to an abortion that the high court has later refined.

On Tuesday, in a 20-page concurring opinion in an abortion-related case on fetal remains in Indiana, Justice Clarence Thomas previewed what is likely to become an all-out legislative and judicial brawl over the topic in the coming years.

“Given the potential for abortion to become a tool of eugenic manipulation,” Thomas wrote, “the court will soon need to confront the constitutionality of laws like Indiana’s.”

Ginsburg shot back that one of Thomas’ footnotes “displays more heat than light.” 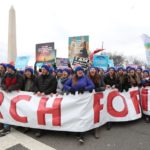 Our Take: Some Democrats Bravely Stand for Life