With Bernie Sanders having won both the Iowa caucuses and the New Hampshire primary, it is obvious that the self-declared socialist who honeymooned in the Soviet Union is now the Democratic frontrunner.

This is not a fluke or an accident, but the culmination of a trend that has been building for years: Socialism has taken over the Democratic Party. From the aging Vermont senator to Alexandria Ocasio-Cortez and her “squad,” it was always just a matter of time before the Democrats finally embraced socialism openly.

This, proves why the 2020 election is perhaps the most important political battle of our lifetime. It truly will be a showdown between freedom and socialism, with the socialists finally being unafraid to admit their intentions and true plans for America. What will you do to take part in this fight and ensure that America never becomes a socialist country? Read The War for America’s Soul to know what you can do to keep us on the path of Liberty. 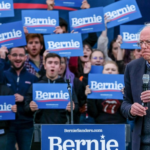 Our Take: Socialism has taken over the Democratic Party