As White House Press Secretaries go, there is no doubt that Sarah Huckabee Sanders has established a name for herself as one of the greatest in recent memory.

For over three years, with both the campaign and the Administration, Sanders had one of the toughest jobs imaginable in today’s political environment: Facing down the Fake News and their ruthless crowds of activists-turned-journalists every single day. In her mission of defending the truth, and making sure the American people could get real information without the spin of the Fake News Industrial Complex, she became the target of just as much vicious vitriol as the President himself.

Whether it was explicit death threats from vile CNN commentators, or being harassed and kicked out of a private restaurant, Sanders and her family had to bear much of the burden of the Left’s undying hatred for America and those who are trying to defend it.

But despite the threats, harassment, intimidation, and other efforts to silence her, Sarah Sanders persevered with a level of grit and determination that is truly astounding even by national Press Secretary standards. She relentlessly pushed back against the outright lies and fake narratives surrounding the Administration, highlighting the President’s many victories when the media refused to do so.

Needless to say, she has earned her “retirement” and deserves a break from a job that may very well be one of the most thankless in America today. But that is exactly why we should thank her all the more, for all that she has done, all that she has gone through…and all that she may still do if she decides to get even more involved in politics further down the line. We can hope. God Bless Sarah Huckabee Sanders!

President Donald Trump announced on Thursday that White House Press Secretary Sarah Sanders will leave the White House at the end of June with plans to return to Arkansas.

After announcing the news on Twitter, President Trump called Sanders up to the podium during a White House event in the East Room to thank her for her service.

“She’s done an incredible job and we’ve been through a lot together and she’s tough, she’s good,” he said as the room applauded.

“She’s a special person, a very, very fine woman. She has been so great,” Trump continued. “She has such heart. She’s strong but with great, great heart.”

Trump added lightly that he wanted her to run for governor of Arkansas.

“If we can get her to run for the governor of Arkansas, I think she’ll do very well,” he said as the audience laughed. “And I’m trying to get her to do that.”

Sanders also spoke, thanking the president for her position.

Sanders said she looked forward to spending more time with her family and her children, but she would “treasure” her time at the White House, calling it “one of the greatest jobs she could ever have.”

“In the meantime, I’m going to continue to be one of the most outspoken and loyal supporters of the President and his agenda. And I know he’s going to have an incredible six more years,” she said.

Trump hugged Sanders and added, “She is a warrior.  Thank you, Sarah, very much.”

The president broke the news on Twitter on Thursday afternoon.

“After 3 1/2 years, our wonderful Sarah Huckabee Sanders will be leaving the White House at the end of the month and going home to the Great State of Arkansas,” he wrote.

A member of the 2016 Trump campaign, Sanders entered the White House as a Deputy Press Secretary before taking the job as Press Secretary in July 2017 after Sean Spicer resigned.

The president praised Sanders for her service at the White House.

“She is a very special person with extraordinary talents, who has done an incredible job!”

“I hope she decides to run for Governor of Arkansas – she would be fantastic,” he wrote. “Sarah, thank you for a job well done!” 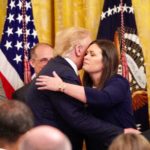