The ongoing impeachment debacle and the recent conviction of longtime Trump associate Roger Stone are two sides of the same coin. In both cases, the same motivation is at play: to destroy anyone who dares to commit the grave crime of being a Trump supporter.

All of the crimes which Roger Stone is accused of committing are procedural crimes that came about as a result of the bogus investigation into alleged “Russian collusion.” Had it not been for the original baseless allegations of “collusion” in the first place, Stone and others like General Mike Flynn and George Papadopoulos would never have been charged with any crimes.

Stone has faced the worst treatment of them all. After being arrested in a pre-dawn raid and put through this trial, he now faces up to 50 years in prison, which would essentially be a life sentence for the 67-year-old political operative.

This is the extent to which the Left and their insidious Deep State allies will go to silence their political rivals. They hate Trump supporters, and want them locked up for their political beliefs. This is political totalitarianism, to which anyone can fall victim. 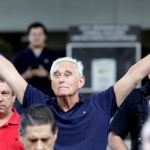 Our Take: Roger Stone: Punished for Being a Trump Supporter