In today’s contentious Congressional hearing, Robert Mueller proved many things about the utter sham that was the Special Counsel investigation into alleged “Russian collusion.”

At the very start, he confirmed that there was no evidence of any such collusion between Trump campaign officials and Russia. He also proved that the entire hearing was almost completely unnecessary, as the vast majority of his responses boiled down to non-answers “I refer to the report,” “I can’t/won’t go into that,” or “that’s beyond my purview.” These responses were given to Republicans and Democrats alike.

The Republicans’ line of questioning proved to be far more powerful than any of the Democrats’ blind praise of the frail and feeble Mueller. From Louie Gohmert and Matt Gaetz to John Ratcliffe and Doug Collins, all of the Committee’s Republicans showed bravery and honor by grilling Mueller over his report, from central inconsistencies to his blatant disregard for basic judicial practices.

But perhaps the most significant question came from Jim Jordan, who asked Mueller about the fact that Joseph Mifsud, a Maltese professor and key figure at the beginning of the Russia probe, lied to Mueller’s team on at least three separate occasions, yet because he was supportive of the “Russia” conspiracy theory and initially claimed to have “dirt” on campaign aide George Papadopoulos, was never charged with lying to the feds even though several Trump associates were charged for making false statements, General Mike Flynn included. When asked about this clear double-standard, Mueller once again incredibly said “I can’t get into that.”

It is clear that Mueller himself, along with the rest of his team, had zero intention of delivering justice. Their objective was to simply remove President Trump from office, and nothing else.

Ratcliffe, a former prosecutor, was moved up by Republicans so that he was the second GOP lawmaker to ask questions to Mueller.

“Which DOJ policy or principal sets forth a legal standard that an investigated person is not exonerated if their innocence from criminal conduct is not conclusively determined?” Ratcliffe asked Mueller, referring back to Mueller’s opening remarks in which he said the special counsel’s office was guided by Justice Department policies in its investigation.

When Mueller didn’t offer a clear answer, Ratcliffe pressed him to give an example of an instance of this other than the investigation of potential obstruction of justice by Trump.

“I cannot, but this is a unique situation,” Mueller said before Ratcliffe cut him off.

“You can’t find it because — I’ll tell you why — it doesn’t exist,” Ratcliffe said.

“Respectfully, director, it was not the special counsel’s job to conclusively determine Donald Trump’s innocence or to exonerate him because the bedrock principal of our justice system is presumption of innocence. It exists for everyone,” Ratcliffe said, raising his voice. “Everyone is entitled to it — even sitting presidents.”

Ratcliffe went on to continue to criticize Volume II of Mueller’s report, noting that the special counsel’s regulation required him to issue a confidential report to the attorney general that lays out prosecution or declination decisions.

Ratcliffe charged that Mueller “managed to violate” Justice Department principles by explaining in his report that he failed to reach a conclusion on obstruction.

Mueller wrote in his report and reaffirmed in his May 29 press conference that he did not answer the question of whether Trump engaged in criminal wrongdoing because of the Justice Department Office of Legal Counsel (OLC) opinion that a sitting president cannot be indicted.

Instead, Mueller’s report lays out evidence he found regarding 11 episodes of potential obstruction by Trump.

Lawmakers are being held to tight timelines for their questions, and Mueller did not get a chance to respond to Ratcliffe’s closing statements. 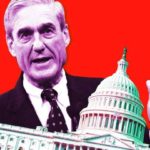