Few things are more satisfying than yet another mainstream media narrative being debunked right in front of the FAKENEWS Industrial Complex, to the point where even they are forced to admit that they were wrong.

After weeks of build-up, with the media trying to convince everyone – and especially themselves – that the pro-Second Amendment rally in Richmond yesterday was going to be a “white nationalist” and “neo-Nazi” gathering. In addition to this blatant smear of thousands of patriots, they were also predicting – and in some cases gleefully – acts of violence.

As it turns out, both turned out to be completely false. The rally took place without incident, as peaceful as possible, and with rally-goers even boosting local businesses and cleaning up their own trash before they left.

Beyond this, the demonstrators conducted themselves with dignity during the protest, waving American flags, carrying on responsibly, and reciting the Pledge of Allegiance. There was no vulgarity, no crude signs, no rudeness to those with whom they disagreed, or any of the other traits often found in left-wing marches, which speaks volumes to the general character of conservatives compared to the character of average leftists. 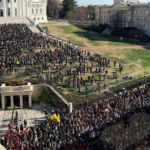 Our Take: Richmond Rally Proves that the Right Protests with Dignity