Yesterday, a handful of brave Congressional Republicans gave us a glimpse of what it would look like if the Republican Party stood up and fought for us.

For this, the Republicans were insulted and mocked by Democrats and leftists on social media, but they held their ground. In doing so, they proved that even just a little bit of spine can go a long way in the ongoing fight for the soul of our nation. We can only hope now that this example inspires more Republican office-holders throughout Congress and across the nation to start showing the same resolve.

As Saul Alinsky taught his followers, you never let the other side rest after a victory against them. That’s what the Democrats have been doing to President Trump for 3 years. Now it’s our turn.

A group of House Republicans made waves Wednesday morning when they successfully shut down a House Intelligence Committee hearing by entering the room where committee members were questioning Laura Cooper, a Defense Department official, who apparently was pertinent to the impeachment inquiry into President Donald Trump.

One of those members was Rep. Bradley Byrne (R-AL), who reportedly engaged in a back-and-forth with Democrat members of the committee, including House Intelligence Committee chairman Rep. Adam Schiff (D-CA) and Rep. Val Demings (D-FL).

During an appearance on Huntsville, AL radio WVNN’s “The Jeff Poor Show” on Wednesday, Byrne dismissed the claim of a “yelling” match with Schiff. He also explained how the situation evolved from a press conference decrying Schiff’s handling of the hearing to members entering the hearing room in the basement of the Capitol.

According to Byrne, a candidate for the U.S. Senate seat up in 2020 in Alabama, this will not be the last the public hears from House Republicans regarding the matter of impeachment.

“This is how the president gets to have somebody present to ask his own questions. They didn’t want to do all that, and now we are where we are. Today they started paying a price they haven’t paid before. They need to figure out where they ultimately want to go with this because I don’t think right now they know what their plan is on how to get this to a vote on the floor of the House.” 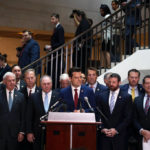