Some say one of the strongest forms of offense is an impenetrable defense, and few things create a stronger defense than rock solid unity. For the longest time, the Democrats have been the party that manages to stay unified and put aside their own internal conflicts in preparation for a larger battle against the GOP.

Now, as the Senate impeachment trial gets underway, the tables have been turned against the Democrats. After failing to maintain unity in the initial House votes to approve articles of impeachment (losing up to four Democrats while the Republicans had no defections), the Senate has proven to have similar battle lines.

When Minority Leader Chuck Schumer kept proposing new amendments to twist the conditions of the trial in the Democrats’ favor, the Republicans came together to vote down over 10 such amendments, all in a party-line vote of 53-47.

For all the Democrats’ hopes of peeling away moderate and anti-Trump Republican Senators, these latest votes seem to indicate that the exact opposite will happen: That even the most unreliable of Republicans in the Senate know this entire impeachment is a farce, and will stand with the rest of the party to defeat it and defend President Trump. 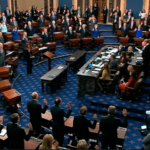 Our Take: Republicans are More United Than Ever Before