Another day, another amazing rally.

But President Trump’s rallies are far more than just celebrations of the President’s many accomplishments. They are a stinging rebuke of the FakeNews narrative that President Trump is somehow losing support, that the enthusiasm is waning, and that 2020 is a foregone conclusion as a victory for the Democrats.

While the mainstream media boasted about Elizabeth Warren speaking to a crowd of roughly 700 in New Hampshire, President Trump’s rally in the same state drew over 11,000 attendees within the arena alone. There were thousands more outside in the overflow area, watching the President on jumbo screens. People were waiting in line for the President as early as two days ahead of time.

Considering that this turnout happened in a crucial swing state that President Trump lost by only about 3,000 votes in 2016, such enthusiasm for the President’s re-election here could not be more significant.

As always, the media continues to ignore the massive crowd size out of spite for the President and his supporters; but they do so at their own peril, risking yet another “upset” election in 2020. Just remember what the New York Times said about Donald J. Trump on the night of the 2016 election, when they projected that he had a mere 15% chance of winning the election.

President Donald Trump hosted a rally in Manchester, New Hampshire on Thursday night as part of his 2020 campaign for President. The venue where Trump’s rally took place was packed with thousands lined up hours before the doors opened. The venue itself holds 11,770, but so many people showed up that many had to stay outside in the overflow space. Read on to see crowd photos and learn more about what happened.

Trump’s rally took place at the SNHU Arena in Manchester, NH on 555 Elm Street. The event started at 7 p.m. Eastern on Thursday, August 15, 2019. The maximum capacity for the SNHU Arena is 11,770 for concerts and 11,140 for basketball events. Because too many people showed up and some had to stay in the overflow area, it’s safe to say  that far more than 11,000 people showed up for the rally tonight.

Even half an hour before the rally began, the venue looked packed. An hour before, there were still some empty seats in the upper tier, but more people arrived as the rally’s starting time drew closer.

Some people who were at the event said that the venue was at capacity and some people with tickets had to be turned away. Tickets don’t guarantee a seat, they just give the hosts an idea of how many people will attend. Seating is always on a first-come, first-served basis.

Some people were in line for Trump’s Thursday rally since Tuesday, WMUR reported. Lisa Belanger, the first in line, talked to WMUR about why she got there so early. “This may be the only opportunity I’ll ever have to go to a Trump rally and I was not going to miss it,” she said. As you can see from the video below, the line to get into the rally was long.

One person noted that the line for the rally went past Beto O’Rourke’s Manchester office.

During his rally, Trump questioned whether they should give up the “greatest slogan” in campaign history, Make America Great Again, for a new slogan since they were already pretty much there. He asked who would support changing the slogan to Keep America Great and the crowd cheered. That’s when he showed his new official campaign hat: a red hat with the white words “Keep America Great.”

Trump talked about the different people he might be facing depending on who wins the Democratic primary. He talked about how he wouldn’t mind “sleepy Joe” but they’re going to cut “way back” on his appearances. He also addressed Elizabeth Warren, Kamala Harris, Beto O’Rourke, and other potential contenders. He mused on whether he should bring up the “Pocahantas” question again regarding Warren, since so much time had passed that people had forgotten. He also relived his win against Hillary Clinton in 2016.

Then he talked about fake news and the crowd booed with a lot of passion. He also told the crowd that the United States is now “stronger than ever before.” But, he said, if he hadn’t won the election the markets that recently crashed would have crashed sooner. It will be worse in 2020, Trump predicted, if a Democrat wins.

Trump talked about his race against Hillary Clinton a lot during the rally. He talked about New Hampshire in the 2016 election, which he lost by less than 3,000 votes to Hillary Clinton. He said the win was taken away from him. He also talked about how people used to say that Clinton’s campaign was “highly sophisticated” but she somehow deleted thousands of emails. “It was disgraceful,” he said. “I will tell you this, we now have a great Attorney General.”

At one point during his rally, Trump stopped his speech when someone in the crowd got sick. He asked for a doctor and paused for about five minutes while they took care of the person on the floor of the venue who was ill. Trump waited to start his speech again until the person was taken care of.

After they were helped, he continued his speech about America’s future and his campaign. “We’re sitting on great wealth; they want to take it away from us,” he said in reference to coal and natural gas. Then he confirmed his stance against windmills, speaking out against them and saying they drive down home values. (Whether that’s true depends on what source you look at. A 2016 study in the Journal of Real Estate Research, studying more than 122,000 home sales within 10 miles of turbines in Massachusetts found “no unique impact on the rate of home sales.” The study noted that property values near major roads and transmission lines might be hurt. Some local areas might, however, see lower property values near wind turbines, but a much-touted 65 percent lower study only looked at three parcels of land, CNN shared.)

Back to the rally… Trump next talked about how hot the steel industry is and discussed iron ore mines. Then he brought up Rep. Ilhan Omar and spoke about doubting that she could broker trade agreements with other countries. (Earlier today, Israel announced that it would deny Omar and Rashida Tlaib entry into the country, BBC reported. They were supposed to visit the occupied West Bank and East Jerusalem next week. Israel allows people who support boycotting Israel to be banned from visiting. Trump had tweeted that allowing them entry would be “great weakness,” and shortly after, Israel announced that it was banning their entry.)

Trump then discussed how China was recently labeled a currency manipulator. He continued, discussing how he works for the good of America, not the world. He promised that as long as he’s President the country will never bow to another foreign nation.

Trump also said he would keep guns out of the hands of people who have mental illnesses. “It’s not the gun who pulls the trigger, it’s the person,” he told a cheering crowd. He pointed to the closing of mental institutions, forcing people onto streets instead, as a mistake

“We’re going to have to give major consideration to building new facilities for those in need…,” he said. “We will be taking mentally deranged people…off the streets so we don’t have to worry so much about them. … (But) we can’t make it harder for good, solid, law-abiding citizens to protect themselves.”

Trump next discussed the opioid epidemic and said they were finally seeing a nationwide decline in drug overdose deaths.

Trump concluded the rally by reminding the crowd that they were “making America great again.” The crowd cheered and the rally ended. 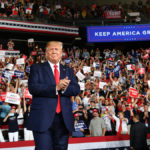