As we discussed yesterday on AMERICA First with Ned Ryun, (LINK) one of the most important aspects of any presidency is the quality of the people who make up the senior staff, both in the White House and elsewhere in the federal government. As the old DC adage goes: Personnel is policy.

Subverting the personnel process remains one of the Deep State’s most effective weapons against President Trump, with hundreds of career bureaucrats and Obama-holdovers remaining in positions of power undermining the MAGA Agenda. In few places is this more prominent than in the intelligence community.

In a realm dominated by supremely corrupt and un-American figures such as James Comey, James Clapper, and John Brennan, a new face like Richard Grenell is a very welcome change. With President Trump nominating Grenell to become the next acting Director of National Intelligence, we finally have a supporter of the MAGA agenda and an America First patriot in one of the most powerful Cabinet positions of them all; and, on top of that, Grenell will make history as the first openly-gay Cabinet member in US history.

The vitriolic reaction to Grenell’s nomination by the media elite (LINKS) and the Deep State is all the proof you need that he is the right man for the job. We need more men like Ric Grenell in government if President Trump is to really drain the Swamp. 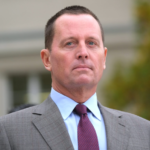 Our Take: President Trump’s Nomination for DNI is Another Blow to the Deep State