First, President Trump tried to pass immigration reform through Congress. When that was blocked by spineless Republicans and obstructionist Democrats, he declared a national emergency and powered through them.

Then, almost every time he tried to properly use the power of the executive to address the crisis, some unelected activist judge would block his actions for the entire country (although some have since been overruled and the President’s authority has been acknowledged on this matter).

Now, working around a do-nothing Congress and judges who abuse their power, President Trump has devised yet another ingenious method for tackling the problem of illegal immigration as directly as possible, by going back to the source: Mexico.

His decision to level new tariffs on Mexico until they cooperate fully with American immigration enforcement is a perfect blend of his two signature issues: Immigration and trade. On the former, he is emphasizing how much this is a national security issue that has direct implications for our relations with foreign countries. On the latter, he is taking full advantage of America’s position as the dominant trade partner with our neighbor to the south, reminding them that from an economic standpoint, they have far more to lose than we do. FAR more.

And through it all, President Trump continues to illuminate two more things on the immigration front: First, that this is a battle worth fighting, with the very fates of our society and our culture at stake. And second, that he is still fully committed to fighting this battle by any means necessary, once again driving a stake through the heart of the far-right/alt-right claims that he is not doing enough on this issue. President Trump cares, and he is fighting for us every single day.

The Daily Caller: Trump Plans To Impose Tariffs On Mexico To Encourage Them To Stop Illegal Immigrants

President Donald Trump announced Thursday that he intends to place a tariff on all Mexican goods until the country helps curb illegal immigration to the United States.

In a series of tweets, the president revealed the “big league” announcement on immigration that he teased Thursday morning.

“On June 10th, the United States will impose a 5% Tariff on all goods coming into our Country from Mexico, until such time as illegal migrants coming through Mexico, and into our Country, STOP,” Trump wrote. “The Tariff will gradually increase util the Illegal Immigration problem is remedied, at which time Tariffs will be removed.”

The White House followed the president’s tweets with an official presidential statement announcing the decision.

“Should Mexico choose not to cooperate on reducing unlawful migration, the sustained imposition of Tariffs will produce a massive return of jobs back to American cities and towns,” the president stated, arguing that Mexico has passively allowed a mass influx of illegal immigrants continue to the U.S., despite an ability to stop them.

Trump is invoking executive authority under the International Emergency Economic Powers Act to impose the tariffs, following the national emergency declaration he made in February to help gather funding for the southern border wall.

The president has previously accused Mexico of failing to properly enforce immigration laws, thus allowing some of the highest levels of illegal immigration to the U.S. in a decade. This year, he has started booting asylum seekers back to Mexico to wait there while their cases are adjudicated, which has become known as the “Remain in Mexico” policy.

If Mexico fails to adequately curb illegal immigration by the president’s judgment, the 5% tariff will be increased by five percentage points each month, hitting a maximum of 25% in October.

“If Mexico fails to act, Tariffs will remain at the high level, and companies located in Mexico may start moving back to the United States to make their products and goods. Companies that relocate to the United States will not pay the Tariffs or be affected in any way,” Trump said.

Acting Secretary of the Department of Homeland Security (DHS) Kevin McAleenan told reporters in a briefing call Thursday evening that the administration believes there are tangible things Mexico can do to help deter migrants.

Chief of Staff Mick Mulvaney revealed on the call that congressional Republicans were briefed on the plan before it was announced and were largely supportive.

Mulvaney also downplayed the idea that placing a universal tariff on Mexico could threaten the president’s negotiated trade deal with Mexico and Canada, calling the immigration-based tariff “separate” from the USMCA. 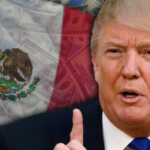 Our Take: President Trump’s Hardcore Move on Immigration and Mexico